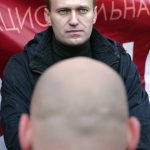 On Friday, commentators were pondering as to what to make of Alexei Navalny’s decision to participate in the Russia march, given that a crowd full of neo-Nazi bruisers is not generally the most likely place to find a dyed-in-the wool liberal.  RFE/RL wrote that same day that supporters of the anti-corruption blogger, who has made leaps and bounds in identifying graft in Russia, ‘say Navalny’s participation in such events is part of an effort to broaden the opposition coalition to include patriotic elements and to drum up right-wing support for his campaign to get voters to refrain from casting ballots for the ruling United Russia party in elections next month’.  The problem is that the nationalist movement is far too unwieldy and diffuse to be managed that easily, as Ria-Novosti points out in an comment piece called ‘chaos and contradiction’.  Some nationalists object to the ongoing ‘feeding of the Caucasus’, others maintain the necessity of its integration within Russia.  The issue, it would seem, proved too incoherent for Navalny to exploit as he would have desired, and his attempts to turn the criticism away from Caucasians and towards the government might have fallen on deaf ears.

In an editorial piece by Andrei Piontkivosky on the Other Russia, he makes clear the link between the government of Vladimir Putin and the ongoing problems in the Caucasus, as well as how this problematizes nationalist sentiment.  It is Vladimir Putin who sponsors Chechen President Ramzan Kadyrov’s squandering of millions on self-agrandising vanity projects.  But as Piontkovsky points outs, were Putin were to cede on those restive republics, it would appear as if Russia had lost control, dealing a blow to the nationalist pride of those very same marchers who complain about what they consider to be their parasitic nature:

Why did we fight two wars in Chechnya? For Russia’s territorial integrity. But territorial integrity does not imply scorched, unpopulated earth. We fought to prove to the Chechens that they are citizens of Russia. But we simultaneously destroyed their towns and villages with planes and salvo rocket systems (and the “Grad” system in open fields, with Putin and Stalingrad behind us) and kidnapped innocent people whose corpses were later found bearing signs of torture.

We have constantly proved to the Chechens the very opposite of what we proclaimed – we proved to them with all of our behavior that they are not citizens of Russia and that we have not considered them to be citizens of Russia for a long time already – but their towns and villages are Russian. And we proved this convincingly not only to the Chechens, but to everyone in the Caucasus. They were good at memorizing the visual lessons we taught them.

And this is the fundamental, tragic absurdity of the war that determined its inevitable result.