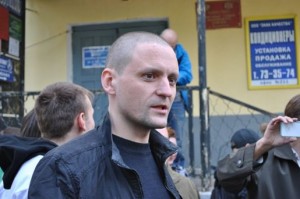 In an attempt to hold an unsanctioned rally in front of the Investigative Committee headquarters in Moscow, Left Front leader Sergei Udaltsov has been detained.  Opposition stalwart Eduard Limonov and Left Front coordinator Konstantin Kosyakin have stated they will refuse to pay fines for violating rally rules in the July 31 Strategy 31 action. As promised, pop star Madonna has flouted St Petersburg’s law forbidding ‘gay propaganda’ by openly urging tolerance and respect for the LGBT community at her concert.  A woman from Novosibirsk has sued Pussy Riot, claiming 30,000 roubles in moral damages, for the emotional distress their ‘punk prayer’ caused.  Artist Peaches has staged a tribute to the feminist activists in Berlin attracting 400 people.

Prime Minister Medvedev has pledged to shake up Russia’s space agency, after another embarrassment earlier this week, which he says is costing Russia ‘prestige and billions of roubles’.  Following an investigation by the U.S. Securities and Exchange Commission under the Foreign Corrupt Practices Act, which found graft endemic in Russia from the mid-1990s until 2006, pharmaceuticals major Pfizer will pay a fine of $60 million.  The Consumer Rights Protection Society has requested that famously flashy Patriarch Kirill be nominated for the Nobel Prize for Economics, in a sarcastic nod to the church’s dubious but lucrative financial dealings.

The FT considers how Russia’s seven principal oil firms, with sights set on the Arctic, will evolve given that, ‘they lack individually, the expertise and capital needed for the push into frontier territory’.  A new study has found that, bucking a global trend, young Muslims in Russia are significantly more devout than those aged aged 35 and over.