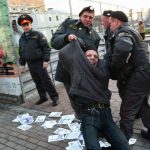 Police have detained around 20 people at the weekly “Elections Without Opposition Is a Crime,” opposition rally in downtown Moscow, which attracted a crowd of 50 activists.  According to RFE/RL, two activists from unregistered opposition party PARNAS have been briefly detained for distributing brochures with advice on how to sabotage the December State Duma elections.   On United Russia’s controversial poster campaign, a spokesman for the Moscow Elections Commission has rebuffed the suggestion that the adverts violate electoral law.  ‘[I]t’s only one step of many toward elections widely expected to be unfair’, says Kathy Lally in an examination of the ruling party’s ‘dirty tricks’.  Yabloko members Grigory Yavlinsky and Alexander Shishlov have penned an op-ed in the New York Times disputing the idea that ‘external pressure’ could help improve electoral transparency.  Sociologists are apparently unable to identify a specific event behind the decline of UR’s popularity, although one Levada Center analyst has suggested it could be a reaction to the party congress in which the Putin-Medvedev job swap was announced.

A Moscow court has agreed to release seriously ill businesswoman Natalya Gulevich, from pretrial detention, only if she posts an all-time record bail of $3.3 million by Monday.  ‘This is yet another reason why the current regime will ultimately collapse. It never punishes those guilty of serious crimes, whether it is Bout or those responsible for the death of Hermitage Capital lawyer Sergei Magnitsky’: Yulia Latynina looks at how the Kremlin protects criminal interests.  Jailed Yukos founder Mikhail Khodorkovsky also foresees the collapse of the regime, through revolution after a long period of stagnation.  The Moscow Times reports on how insufficient law enforcement makes Russia a popular stomping ground for human traffickers and prostitution ring leaders.  Reuters reports on the Kremlin’s controversial new ‘pro-life’ legislation designed to tackle Russia’s abortion rate, which is the highest in the world.

Russia has lambasted the Tajik government for the incarceration of two Russian pilots convicted of smuggling, saying the verdict is ‘causing serious damage’ to bi-lateral relations.

Disappointment for Russia’s space agency as a robotic spacecraft to the Mars moon Phobos has experienced a malfunction.  The six men who successfully ‘traveled’ to Mars without leaving downtown Moscow, having just completed their 520-day experiment, are apparently in good health.