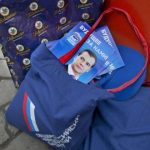 President Medvedev (whom Vladimir Putin has confirmed will be Prime Minister if he returns to the Presidency) has urged Russians to cast their vote for United Russia, in a speech which emphasized that instability and fragmentation would be the inevitable result of any other option.   The Telegraph reports on how the ruling party hopes to mobilize the support of Russian soldiers.  The UR campaign trail continues to provoke controversy with allegations that Russian authorities have tightened control over media outlets prior to the elections.  According to the Moscow Times, Reporters Without Borders has compiled a list of recent freedom of information violations which show ‘that no methods are being spared to bolster strongman Vladimir Putin and promote unanimous acclaim for his decision to run again for the presidency’.  As censorship of television news reports has become commonplace, Youtube is the only locus for dissenting voices, says this article.  Tangled Web reports on how an interactive online map to monitor election violations, launched by watchdog Golos and Gazeta.ru, has been subject to interference by the authorities, prompting a deputy editor at the newspaper to resign.

Vladimir Ryzhkov foresees trouble for Putin in the March election on the basis that ‘the shock caused by the ruling regime’s outrageous excesses will also reflect on the results of Putin’s next “special operation”: the presidential election’ in a Moscow Times op-ed.  The Prime Minister’s party is ‘hemorrhaging support’, says Bloomberg, and some analysts argue that its dwindling popularity will see Putin seek to consolidate executive power when he return to the Presidency.  Alexander Lebedev agrees that Putin may have gone too far, stating ‘clearly this system is at the brink of extinction in my view: so the option is something happens from above or something happens from below’.   Chrystia Freeland from Reuters says that the practice of exiling the opposition, a key aspect of Putinism, has proved, ‘chillingly […] that soft authoritarianism can be more effective than the more brutal sort’.  But how will the West respond to the establishment of Putin’s new empire?

More than 1,500 activists from several opposition parties have gathered in protest in the city of Izhevsk ahead of the parliamentary elections.  In the city of Voronezh, anger with the ‘oligarchy monster‘ created by Putin has apparently prompted some businessmen to vote Communist.  A resurgence of aggressive ultra-nationalism might reflect a widespread anger with the current regime, argues Reuters.  According to a new survey, Russians are among the most dissatisfied in the world with their health and well-being, expressing disappointment with the health-care system and numerous concerns about the environment.

‘[W]orking with Russia today is in fact the key to preventing the United States from becoming a hostage to Pakistan’s dysfunctional politics and its ambitions in Central Asia’ argue two military strategists who sees the US exit from Afghanistan as dependent on cooperation with its reset partner.  President Medvedev has denied that plans to put offensive weapon systems on Russia’s borders to counter a planned European missile shield are simply pre-election grandstanding.

PHOTO: A bag of campaign leaflets for United Russia on a Moscow street Thursday, December 1, 2011. The ruling party is slipping in polls.  (Vladimir Filonov/MT)