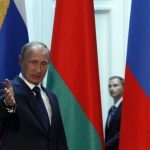 A Moscow court has upheld the Justice Ministry’s decision and will deny registration to the Other Russia party for the December elections, as party head Eduard Limonov says he hasn’t given up his presidential ambitions.  The Moscow Times reports on the celebrities running in United Russia’s primary (‘novelty’) elections, which are drawing to a conclusion. This report analyses the democracy of a varied array of former Soviet states, as former Soviet Union president Mikhail Gorbachev talks to a German newspaper about Vladimir Putin’s main political interest: power.  ‘I am worried by what the United Russia Party led by Putin is doing and by what the government is doing,’ he said.  Belarus has slammed new economic sanctions from the U.S., saying that they will negatively affect those of its sectors that are closely linked to Russia, and Prime Minister Mikhail Myasnikovich has asked Vladimir Putin to develop measures to support his country until they are suspended.

A criminal case has been opened into the alleged corrupt activities of former Tula Governor Vyacheslav Dudka.  The FSB say that a planned terrorist attack on a Moscow bullet train has been foiled.  Vladimir Ryzhkov on Putin’s demonisation of the word ‘liberal’, and the obstacles faced by new Russian liberalism.  The Federal Transportation Inspection Service has reported the findings of its probe into the sinking of the Bulgaria pleasure boat.

RFE/RL looks at the ‘unholy mess’ that is the North Caucasus.