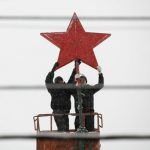 In an article published yesterday in Izvestia, ‘which opponents said was short on specifics’, Vladimir Putin has attempted to justify his bid for the presidency, promising to help Russia continue on its path of ‘stability’ once he returns to the presidency, and arguing that the main driver for economic growth should be ‘the initiative of the people’.  Observers are noting the lack of detail in Putin’s election platform.  Former Finance Minister Alexei Kudrin’s attempt to organise dialogue between the Kremlin and the organisers of planned demonstrations in February and March is faltering, he says, because neither side is willing to compromise.  Kudrin says he supports the creation of the Voters’ League movement.  Outgoing President Dmitry Medvedev has proposed a law to restore the direct election of governors.  A working group to memorialise victims of political oppression in Russia, established by Medvedev last month, has held its first session.  Yevgeny Yushkov has staged a one-man protest in Kirov outside the local FSB branch against ‘the persecution of the Russian opposition’.  Activists in Barnaul are attempting to avoid arrests by placing toys bearing mini-placards in the city’s main square – dubbing it a ‘nano demonstration’.

Alexander Lebedev writes in The Guardian today about the Roman Abramovich vs Boris Berezovsky court case, predicting that, due to the history of accumulated wealth in Russia, more disputes like it will emerge soon.  Conditions in the prison colony where Mikhail Khodorkovsky is being held have ‘significantly improved’, after cameras installed to monitor him caused an end to random beatings, says a former prisoner.  Officials still have no concrete idea of where exactly debris from the Phobos-Grunt space probe fell to earth, as the government investigates possible causes for the probe’s failure – including a powerful electromagnetic emission from a U.S. radar in the Pacific.  Dmitry Rogozin has vowed to take ‘personal control’ of the investigation, and has called on Roscosmos to name the ‘antiheroes’ responsible.

Is Russia warming at twice the rate of the rest of the world?  Investigators believe that the Koobface gang, responsible for large-scale Facebook-based computer viruses, ‘are hiding in plain sight in St. Petersburg.’

PHOTO: Workers remove a star as they dismantle a Christmas tree in a square in Russia’s southern city of Stavropol January 16, 2012. REUTERS/Eduard Korniyenko