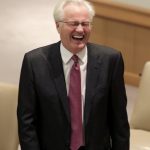 United Nations leaders have confronted Russia over its refusal to condemn the Syrian government (although Russia is ‘backed discreetly by China and India’, notes the New York Times).  Russia maintains its position that it isn’t the U.N.’s place to say who stays in power, and warned Arab leaders not to cross a ‘red line’.  According to a member of the Syrian opposition, the current regime ‘would crumble’ without Russia’s support.  Russia’s E.U. envoy maintains that a resolution that does not rule out military intervention will not pass.  The organisers of Saturday’s planned opposition rally have met to set an agenda for the day, agreeing on a list of demands that includes free and fair elections, and the reform of the political system.  The Moscow hub of the press ministry is denying accusations that it advised journalists on how a pro-Putin rally should be covered (‘Note that people came of their own free will’?).  A lawyer for Life News says that the paper’s publication of Boris Nemtsov’s private telephone conversations did not break the law, because the information in the recordings was released to ‘defend public interests’.

Alexander Shemelev, a United Russia member and governor in the Primorye region, has been sacked for threatening to ‘thrash’ the opposition back in 2010.  Dmitry Rogozin, meanwhile, is calling on Russia’s patriots to unite against opposition rallies, warning Russia not to become ‘weak’.  Police in Moscow prevented unsanctioned activists from Eduard Limonov’s Strategy 31 movement from demonstrating against Vladimir Putin in Triumfalnaya Square last night – there were a reported 49 arrests.  British bookkeepers are in no doubt that Putin will win the presidential elections, as rival candidates pledge not to run negative campaigns against the Prime Minister.  Putin’s supporters are opposing Dmitry Medvedev’s nomination of former Astrakhan Mayor Sergei Bozhenov as the new Volgograd governor, apparently because of vote-rigging allegations against him.  RFE/RL reports on the League of Voters, many of whose leading members are cultural figures.

Yulia Latynina on the impunity of ‘killer cops’.  Phobos-Grunt became stranded in Earth orbit due to ‘radiation’, experts say.