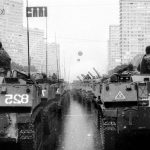 Nine members of United Russia have defected to the A Just Russia Party, which also expelled five of its Duma members for joining the All-Russia People’s Front.  Russia has already lost track of the $265 million Express AM-4 telecommunications satellite that it launched two days ago (whilst insurer Ingosstrakh presumably waits with bated breath).  An annual U.S. State report on terrorism singles out violence in the North Caucasus, registering 529 attacks in Russia since last December.  Officials in Karelia are trying to ban Halloween this year, arguing that the holiday promotes ‘Satanism and extremism’.  Has Russia been passing its fighter jet technology to China?  Bloomberg reports that Moscow had its own wave of ‘petty hooliganism’ earlier this week in the wake of the London riots, as a few hundred youths gathered and tried to block traffic.

More memories from 1991 to mark today’s 20th anniversary since the failed coup: Sergei Filatov recalls how coup plotters seized control of broadcast media and played repeated loops of Swan Lake.  Opinion polls suggest that few Russians see the events of 1991 as a victory for democracy, says the New York Times.  More from Mikhail Gorbachev: Vladimir Putin offers stability, but stability kills development; and current leaders have ‘castrated’ the electoral system; the BBC’s footage of the former Soviet leader includes images and video from the original coup.  RFE/RL has more images.  The Soviet Union is dead, says this Washington Post opinion piece, and so is democracy.  Leon Aron looks for causes for optimism in contemporary Russia, including charity support and activism; others insist that ‘ubiquitous cynicism toward politics and lack of interest in political activity make the sentiments of 20 years ago seem impossible.’  Robert Kagan remembers ‘the painfully slow reaction of the administration of George H.W. Bush’.

VIPs in Russia are immune to flight security measures, as evidenced by a cargo of bees let loose on a Moscow-bound flight.  Two shark attacks off Russia’s Pacific coast have prompted the emergencies ministry in Primorye to advise swimmers to prod predators in the eyes and gills.  Russia’s sturgeon population has reduced by 99% in the last 15 years, according to the fishing agency (explaining President Dmitry Medvedev’s releasing hundreds of the fish into the Volga River earlier this week).