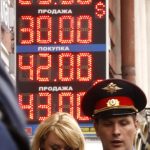 Mikhail Prokhorov, the leader of the Right Cause Party, is accusing United Russia of removing 200 of his party’s propaganda posters in Yekaterinburg, Novosibirsk and Moscow.  ‘They’re afraid we’ll not let United Russia get its planned percent [of votes].’ An estimated 200-strong group of taxi cab drivers demonstrated in Moscow yesterday against new laws that, they say, will destroy their ability to make a living.  Moscow conservationists who were beaten earlier this week for trying to defend a 19th century building from demolition say that police are reluctant to investigate their assault.  Moscow has completed its retaliatory blacklist of U.S. officials that it will ban from its territory, which supposedly includes those linked to the trials of Viktor Bout and Konstantin Yaroshenko, although the list will reportedly not be made public.  Perhaps the two countries can unite over their mutual hatred of credit ratings agencies, suggests this Moscow Times editorial.

Georgia says it doesn’t feel any particular pressure to allow Russia to join the W.T.O. if the terms are not fair, and the Georgian Ambassador rebuked Moscow’s latest outbursts: ‘For the moment, the rhetoric and the actions by the Russian Federation does not contribute to the constructive and positive outcome of negotiations.  The Telegraph dredges up 400 years of Russo-Polish enmity.  Dmitry Medvedev has met with the President of Azerbaijan to discuss the Nagorno-Karabakh conflict.  ‘Russia is burning again’: The Guardian reviews the current extent of forest fires.

The Guardian reports on a couple of Russian press responses to the London riots: ‘Pravda’s English-language website asked, “London riots: Divine justice?”, and linked the situation with the UK’s decision to topple Libya, while another article was headlined: “Britain falls victim to its own cult of absurd tolerance”.’  The Pravda article itself references ‘the sheer hypocrisy’ of Western governments.  A Supreme Court ban on the ultra-right Movement Against Illegal Immigration (DPNI) has been upheld.

The body of the plane that crashed yesterday in the Far East has been found.  Seven people have died in a gun battle in Dagestan.  A new reality show in the U.S., Brighton Beach, focuses on its largest Russian-speaking community.