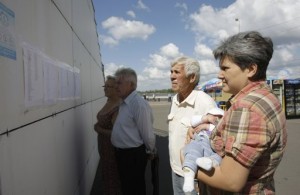 Russia will observe a national day of mourning today, as the death toll for the tourist ship that sank on the Volga River over the weekend has reached 129, with around 50 bodies, mostly thought to be children, still trapped in the wreckage.  ‘The number of old rust tubs which we have sailing is exorbitant,’ said President Dmitry Medvedev, but the disaster has apparently not yet resulted in any cancellations for river cruise bookings.  Transport Minister Igor Levitin says that the captains of two vessels that passed the wreck but did not help those overboard will face ‘maximum punishments’.  The ship apparently left port with a broken engine.  The death toll for the passenger plane that crash-landed on the Ob River yesterday has risen to 6, with relatives of those killed set to receive compensation.  ‘Russia has a history of disasters and deadly accidents stemming from lax implementation of safety rules, from fires to plane crashes and mining disasters.’

Federation television channels are going after Perm’s regional authorities, citing problems such as delayed construction, prostitution and corruption.  President Barack Obama says that the U.S. will support Russia’s negotiations in Libya if Muammar Gaddafi steps down.  The Moscow Times has compiled an exhaustive analysis on the possible outcomes of next year’s presidential elections, running through scenarios of Medvedev, Putin, or ‘President X’, and outlines current uncertainties that could alter the political climate, including terrorism, a protracted economic crisis, and the Putin ‘fatigue factor’.  A group of neo-Nazis have been handed life sentences as their lawyers claimed that they were coerced and brainwashed with ‘far-right ideology’.  Controversial charity the Federation Fund, which reportedly paid Hollywood stars to attend a recent event, claims that it is ‘no longer about raising funds, but raising awareness’.

On the legends and mysteries of St. Basil’s Cathedral, which celebrates its 450th anniversary today (click for images).  North Pole tourism involves camping on ice floes in the Russian Arctic.  Russian cyclist Alexandr Kolobnev is the first to withdraw from the Tour de France following doping allegations.