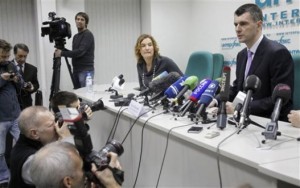 Russia’s third richest man and one-time leader of Right Cause, Mikhail Prokhorov, has announced he will run for president in the March elections.  Opposition members have been quick to suggest the move is a Kremlin-backed attempt to deflect attention from the real protest movement, as has David Clark, chairman of the Russia Foundation, in an interview with the BBC.   ‘Prokhorov’s task is to accumulate the protest votes and help Putin get elected’, says Boris Nemtsov.  Political analyst Stanislav Belkovsky, quoted by the Guardian, has described Prokhorov’s bid as ‘a pure fake and bluff”.  ‘Either it’s something agreed with Putin to bolster the legitimacy of the presidential elections after the recent protests or Prokhorov could be jumping on the bandwagon of the protests‘, Sergei Markov,  head of the Institute of Political Studies in Moscow, has told the Washington Post.   Masha Lipman from the Carnegie Moscow Center argues that whatever the motivation, the events of the past week have eroded the government’s stranglehold on politics.  An op-ed by Vladimir Ryzkhov considers how the parliamentary opposition made up of the Communist Party, the Liberal Democratic Party and A Just Russia could exert pressure on United Russia if they ‘step up to the plate’.   Garry Kasparov suggests that if the ‘systemic opposition leads to the emasculation of popular protest’ then it will have to be acknowledged that there is no way of reforming the current system from within.  Tycoon and Kommersant owner Alisher Usmanov has also stepped into the political fray by firing the holding CEO Andrey Galiev and editor-in-chief of the Kommersant Vlast magazine Maxim Kovalsky after they published photos lambasting Putin, which the businessman apparently compared to ‘hooliganism’.

United Russia has defied criticisms of electoral fraud with a rally in Moscow, around the theme of ‘Putin, stability and strength’.   Police say 25,000 attended.  The real figure, says Gazeta.ru, was around 5,000, some of whom were apparently coerced into attending.  ‘I had no doubt that United Russia would win’ was apparently one of the questions featured on a last-minute Russian language test thousands of Russian children were required to sit on the day of the anti-government rallies, reports the Moscow Times.  Surprisingly, state-run channels gave considerable (if neutralizing) coverage of Saturday’s anti-government rallies, perhaps, some say, an acknowledgement that smartphone videos of the events would go viral anyway.  Much has been made of the use of new media in the protest movement; here RFE/RL reports on how the regime is employing Facebook to its advantage and as one strand in a campaign to mollify disgruntled voters.   A group entitled “United Russia for fair elections” has apparently been launched on Facebook on behalf of Russia’s largest political party.  The Washington Post reports on activism in the era of ‘dostali’.

A Moscow court has apparently ruled that the arrest of Left Front leader Sergei Udaltsov was legal.  Lawyers of detained activists Alexei Navalny and opposition leader Ilya Yashin have lodged their complaint to the European Court of Human Rights.  It is said that EU officials intend to raise the issue of election fraud allegations at talks with Russian President Dmitry Medvedev this week.    This report suggests that the Russian Central Election Commission may not invite international observers from the OSCE to monitor the presidential elections in March.