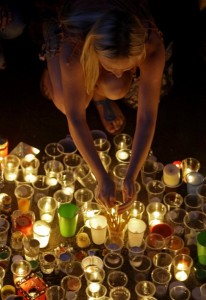 President Dmitry Medvedev is urging the military to buy its weapons abroad rather than buying ‘junk’ from domestic producers, highlighting concerns over ‘Russia’s decrepit arms industry’.  He has also promised to liberalize election laws and the political system, and reiterated his commitment to decentralization.  A criminal negligence investigation has been opened into the tourist ship Bulgaria, which sank on the Volga River earlier this week; the head of the company that leased the boat has been detained, amid reports that the boat was not in fit condition.  Prosecutors say that the boat did not have a license to carry passengers, and Reuters suggests that the government will seek to shift blame away from the state. ‘The degree of irresponsibility at all levels of authority and among citizens has reached the level of being a threat to Russian national security every day.’  The death toll is currently at 100, with 29 passengers still unaccounted for.  The BBC has footage of the memorial service held yesterday in the port of Kazan.

The Foreign Ministry has dismissed Georgia’s arrest of three photographers on charges of spying for Moscow as evidence of Tbilisi’s ‘anti-Russia hysteria’, as NGOs claim that there is no evidence of their guilt, and the photographers themselves insist that the charges are political.  Foreign Minister Sergei Lavrov is visiting the White House today, with the major focus of discussion expected to be missile defense.  Plans to expand Moscow’s borders, more than doubling the size of the region, could take 20 years to complete, under a new plan put forward by Mayor Sergei Sobyanin this week.  Following in the footsteps of Sergei Mironov, who criticized the now-ended Spring Duma session last week, Communist Party leader Gennady Zyuganov also lambasted the session for its wasted opportunities.  The BBC has picked up on the Strasbourg concert held in honor of Mikhail Khodorkovsky, and spoke to some of the musicians, including Mischa Maisky.

PHOTO: A woman lights a candle at the port of Kazan, Russia, Tuesday, July 12, 2011. Russia is observing a day of mourning for victims of a cruise vessel that sank while crowded with holiday-makers on Sunday. (AP Photo/Misha Japaridze)