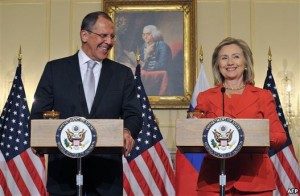 Keeping the reset warm, the United States and Russia have signed agreements reforming the rules for inter-country adoption and liberalizing visas regime, following Foreign Minister Sergei Lavrov’s three-day visit to Washington.  Tighter controls for the controversial adoption issue include fee increases for adoptive parents, and Moscow’s right to veto the use of certain US agencies.  High-ranking members of Germany’s coalition have criticized an independent group committee for choosing unlikely candidate Vladimir Putin for the Quadriga award for freedom and democratic change.  According to an unidentified source on Reuters, President Medvedev angled for the political backing of Russia’s business community in a presidential bid against Putin, after a meeting with 27 tycoons on Monday. Brian Whitmore questions the credibility of such claims on the Power Vertical.  Media tycoon Alexander Lebedev has also weighed in on electoral debate, arguing that if Putin has another twenty years in power Russia ‘will be Zimbabwe’. In a poll to gauge ministerial popularity, residents of 138 settlements in 46 regions gave their highest approval ratings to Emergency Situations Minister Sergei Shoigu, Foreign Minister Sergei Lavrov and Deputy Prime Minister Sergei Ivanov in descending order.

The death toll in the Volga river disaster has reached 105; divers are currently searching for the 29 remaining bodies. A district court in Kazan has ordered the arrest of two suspects, one a regulator and the other the company director who rented the ill-fated cruise boat on Wednesday.  Meanwhile it has been reported that the State Duma may pass a bill on the compulsory insurance of passengers by carriers in a second reading in October.  Following a plane crash in June that killed 47 people, Russia’s aviation authorities have suspended the license of airline Rusair.

Georgia has announced that a European Pressphoto Agency photographer detained on suspicion of spying has links to two Russians expelled for espionage five years ago.  A member of the Presidential Council on the Development of Civil Society and Human Rights has apparently told Ria-Novosti that Russia’s official investigation into the murder of human rights activist Natalya Estemirova is being carried out ‘in a dishonest fashion’. See here for evidence of Belarus’ ongoing crackdown on anti-government protesters.  How Russia’s Communications Ministry plans to suppress offensive and extremist user comments from online media pages; blogs and social media will however, remain untouched.