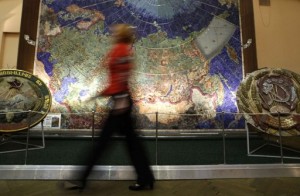 An elderly St Petersburg resident suffered a broken hand after a local rally was crashed by a United Russia candidate, with several further protesters detained.  Moscow Mayor Sergei Sobyanin says that City Hall is supporting United Russia lawfully: ‘it would be strange for the city administration and ruling party to have different slogans,’ he said.  Politics has invaded television in the run-up to the elections, replacing fires, floods and contract killings with ‘happy milkmaids’ and evidence of demographic crisis, notes Alexei Pankin.  The Central Electoral Commissio says that a PACE fact-finding mission is in breach of national legislation.  It was reported yesterday that the Defence Ministry is planning to buy 10,000 badminton rackets (‘watching the birdie will be particularly good practice for snipers and riflemen’), but it has since been denied by a ruffled ministry, who insisted that ‘badminton is not a military applied sport in the Russian armed forces.’  Chinese researchers are defying government orders in order to hold a ceremony awarding a peace honour to Vladimir Putin.

Foreign Ministry Sergei Lavrov says it is ‘wrong’ for the Arab League to suspend Syria, and has agreed to meet with a senior leader of the Syrian opposition, accusing the West of sabotaging attempts to end violence by encouraging the opposition to reject dialogue.  Russia has apparently called for British help in resolving the dispute over the planned US-NATO missile defence shield.

South Ossetia’s surprise election results revealed a tie between Moscow’s preferred candidate and an opposition figure, highlighting discontent with the outgoing president, who has been accused of misusing Russian funds.  Bloomberg reports on the Russia-Georgia feud that is playing out in Tuvalu.  The Kremlin is dealing with the Defence Ministry’s enormous stockpile of old weapons by earmarking funds for a reprocessing program.  ‘Putin is very fond of the idea that the Arctic ice will soon melt,’ but his nuclear submarines are a nuclear deterrent, not a defence for transportation lines, says Alexander Golts.

Islamic leaders from across the CIS are meeting in Moscow for a forum discussing the last 20 years of religious developments in their regions.  The head sanitary official wants all Tajik labour migrants to be banned from Russia for health reasons.

PHOTO: A visitor walks past a map of the USSR studded with semiprecious stones at a geological exploring museum in St. Petersburg, November 14, 2011. REUTERS/Alexander Demianchuk