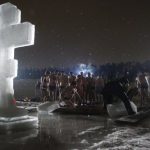 The League of Voters, created yesterday by a group of ‘leading celebrities’, was immediately refused a meeting by Prime Minister Vladimir Putin, as analysts speculated that it has too many ‘ideological divisions’ to garnish strong support.  Putin has lashed out at an opposition radio station for ‘pouring shit all over me from dawn to dusk’, and complained that certain figures, despite being invited for talks, ‘do not want to have a discussion’.  Deputy PM Igor Shuvalov says that the wave of anti-government protests is a consequence of economic development.  ‘This is the new situation.  It is here to stay.’  This Moscow Times piece also correlates unrest with economic prosperity among the middle classes. Opposition figures Gennady Gudkov and Vladimir Ryzhkov claim that their phones are tapped, after they were secretly filmed discussing plans for the upcoming rally and disparaging other members of the opposition.  Alexei Navalny met with an Orthodox Church representative to discuss ways of fostering dialogue between oppositional and established political forces.  Yulia Latynina warns against ‘reckless babble’, or unsubstantiated accusations, leveled against the opposition.

A request to hold a gay rights protest on Pushkinskaya Square in Moscow late at night – to protest new laws banning ‘promotion’ of homosexual activities to minors – has been denied.  Britain’s former chief-of-staff, Jonathan Powell, admits to the BBC that the UK ‘really did use a plastic rock’ to spy on Russia in 2006.  A Russian group, the Pirate Party, has joined the global campaign against anti-piracy bills in the U.S. Congress, saying that they would jeopardise Russia’s internet freedoms.  The names of five ringleaders of the Russia-based Koobface malware gang were released this week, leading to an instant reduction in Facebook-related infections.

Foreign Minister Sergei Lavrov has expressed concern about the prospect of military action against Iran, claiming that it would cause a ‘chain reaction’ that would affect the entire world.  He also called on the U.S. to scrap the ‘Cold War relic’ of the Jackon-Vanik law.  The new U.S. Ambassador to Russia, Michael McFaul, has been accused of planning to ferment current instability.  A major combat training centre is being build in the Nizhegorod region.

PHOTO: People gather around a bath of ice cold water as they prepare to plunge into it at the Kolomenskoe park on the outskirts of Moscow, Russia, Thursday, Jan. 19, 2012. (AP Photo/Mikhail Metzel)