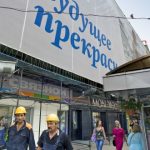 Two prison doctors have been arrested in connection with the death of Hermitage Capital lawyer Sergei Magnitsky, who died in pretrial detention in 2009.  The Russian presidential civil society and human rights council has apparently suggested that more law enforcement and state security officials could be prosecuted over the death of the lawyer, who was denied medical treatment and allegedly beaten.  German non-profit group Quadriga has decided to cancel its annual prize after the decision to nominate Vladimir Putin provoked outrage, the final straw seemingly being previous winner Vaclav Havel’s claim that he would return his 2009 prize in protest against the Prime Minister’s nomination.  The Other Russia reports that around forty opposition activists have been arrested over the past few days in Moscow during an ongoing sit-in protest against what they say is the politically-motivated arrest of Taisiya Osipova, the wife of Other Russia party bureau member Sergei Fomchenko.  Despite refusal from the authorities to allow for its registration, Vladimir Ryzhkov asserts that Parnas will make its mark on the political landscape.  Awaiting a key piece of evidence, a Moscow court has adjourned the libel trial against music critic Artym Troitsky.  Police in the capital have pledged to investigate claims that a police officer threatened a pregnant woman with a gun over a traffic violation.  In what has widely been seen as a continuation of the onslaught against Yukos and all its associates, a Moscow court has sentenced a Spanish national to eight years in prison after finding him guilty of embezzling $13 billion from Faroil, a subsidiary of the now-defunct company.

Georgian authorities apparently claim that one of three Georgian news photographers accused of spying for Moscow has admitted passing secret official information to a fellow photographer also suspected of espionage, an admission which has surprised the photographer’s own lawyer.  A major terrorist attack on Moscow has been averted, authorities claim, with the arrest of four people from the North Caucasus suspected of planning an atrocity.  Russia has criticized the United States and other countries which have recognized the rebel National Transitional Council as Libya’s legitimate government.   Should the Libyan leader Muammar Gaddafi step down, Russia would not provide shelter, Foreign Minister Sergei Lavrov has asserted.

Despite adverse weather, salvage crews are attempting to raise the wreck of the Bulgaria cruise ship which sank last week.  Rescuers in the Komi republic have found the dead bodies of two coalminers, who were trapped in the Severnaya coalmine of the Vorkutaugol Company on Saturday.  A Mi-8 helicopter has crash-landed in the Urals region, killing at least one person; the third reported crash landing involving Mi-8 helicopters in just one week. The Moscow Times reports that illegal drug abuse in the capital has grown at least ten times since 2001.  President Medvedev has signed a law which would emphasize the ill effects of abortion, in the first move to restrict the practice since the fall of communism.

How Putin’s fans have discovered new ways of unveiling their adoration.

PHOTO: Construction workers walking on the Garden Ring. The banner above them reads, “The future is beautiful.”  (Vladimir Filonov / MT)