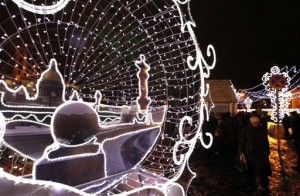 Over 40,000 people are expected to turn out for tomorrow’s anti-government rally in Moscow, as pro-Kremlin youth groups such as Young Russia plan counter-demonstrations.  The Guardian has compiled a piece on ‘the faces of Russia’s protest movement’, with portraits and interviews with Yevgenia Chirikova, Alexei Navalny, Ilya Ponomaryov, and others.  Chirikova has appeared in public together with Boris Nemtsov in a bid to make amends following leaked excerpts from telephone calls in which Nemtsov insulted her; their meeting draws attention to the popular new online television channel that broadcast it, and its role as an alternative to Kremlin-run tv.  Alexey Kovalev explains why the Russian leadership remains wary of political satire. The U.S. has dismissed Russia’s call for the U.N. Security Council to investigate civilian deaths in Libya as ‘a cheap stunt’.

The policy proposals outlined in the President’s speech suggest that he could ‘continue to wield significant influence even after he steps down,’ suggests one review; his promises are ‘too little and too late’, says another.  Reuters has compiled various further reactions to the speech, some of which acknowledge Medvedev’s concession to the protesters in discussing reform, while others accuse him of attempting to stay in Putin’s good books.  Countering Medvedev’s hint that ‘foreign interference’ was to blame for fomenting domestic political unrest, his own economy aide, Arkady Dvorkovich, said that the rallies had nothing to do with outside influence, and denied that the President’s speech was strongly influenced by the current mood of protest.  Vladislav Surkov says he supports the protest rallies, calling the political system ‘dull and stupid’.  Critics are dismissing Putin’s attempts to unite former Soviet republics under one Eurasian Union, which one political analyst calls ‘a very good pre-election fairytale that will never be realised’.

Deputy Prime Minister Sergei Ivanov’s appointment as Kremlin chief of staff, signed by President Dmitry Medvedev after his state-of-the-nation speech yesterday, is ‘a reward for one of Prime Minister Vladimir Putin’s closest allies,’ says the Moscow Times.  The street where Putin grew up could take his name as a birthday present for the Prime Minister next year.  Putin often references the long-held presidency of Franklin D. Roosevelt to defend his rule, but ‘after Roosevelt’s presidency, the United States concluded that more than two presidential terms is not only wrong, but it is also potentially dangerous and harmful to the country’.

Russians to boost the Queen’s income by renting royal gardens?