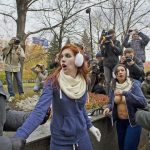 Prime Minister Putin has urged Ukraine to abandon its political ‘phobias’ over accession to the Customs Union of Russia, Belarus and Kazakhstan and focus on its future potential.  Ukrainian Prime Minister Mykola Azarov is said to be considering the offer carefully.  In an interview with the heads of Russia’s three largest television stations, Putin used the career path of NTV’s Vladimir Kulistikov, formerly of RFE/RL, as an example of increased Russian ‘liberalism’ in the media. In the interview, which can be viewed here, he also rebuffs comparisons with Brezhnev on the basis that he is more hardworking than any of the Soviet leaders.  President Medvedev has similarly denied claims that Putin’s return to the Presidency will herald the redoubling of Brezhnev style authoritarianism, also pointing out that ‘any stagnation is unacceptable’.  The President simultaneously highlighted a prime affliction of Russia’s byzantine political structure: ‘It’s a sign of the ineffectiveness of the system of government on the whole when, in order to resolve a basic question, one needs to appeal to the president, governmental representative or governor of a large region’.  Putin’s right hand man has also promised a fair December election.  Vladimir Churov, chairman of the Central Elections Commission, will not be able to observe the US elections next year as he has been, in his own words, ‘honored’ with being on the US’ Magnitsky sanction list which bars him from entry.  Following months of indecision, a gravely ill businesswoman held in pretrial detention in Moscow may be imminently released, after the city court ruled that her arrest had been extended illegally.

A pair of female American PETA activists have learned that unless you’re stripping for Medvedev, unsanctioned protests will not be tolerated in Moscow.  RFE/RL reports on how 20 residents of a central Russian town have picketed the governor’s office in the regional capital, Yekaterinburg, in protest against plans to build an environmentally-damaging factory near their homes about which they were not consulted.  A former traffic policeman has retracted defamation charges against rock critic Artemy Troitsky, who had accused him of mishandling an inquiry into the 2010 road incident in which two people died in a collision with a car transporting Lukoil’s vice president.

Russia’s ambassador to NATO, Dmitry Rogozin, says Russia will retaliate to the deployment of elements of the U.S. antiballistic missile system in eastern Europe, but these measures will be executed alongside the continuation of talks.  The Kremlin, is it would seem by this report, unimpressed with Washington’s invitation to monitor missile-defense flight tests.  Moscow is apparently concerned that its plans to resolve the major power’ dispute with Tehran will be derailed by a new UN report which is expected to exacerbate suspicions about the regime’s nuclear ambitions.  British Liberal Democrat Mike Hancock, the alleged victim of a Russian spy honeytrap, has decided to step from the House of Commons’ Defense Committee.  His former research assistant and lover Ekaterina Zatuliveter denies the spying charges.

A Su-24 bomber has crashed in the far east killing both crew members.  It has apparently been confirmed that pilot error was the source of the crash which killed the Yaroslavl Lokomotiv ice hockey team in September.