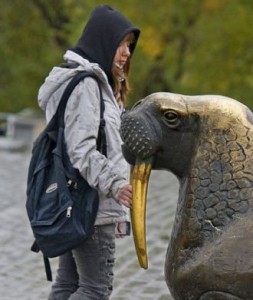 According to the BBC, the upper house of Russia’s parliament has set March 4 2012 as the date for the presidential election; election campaigning will commence immediately.  Using the examples of the US and the eurozone, Vladimir Putin has, in an address to United Russia leaders, warned that a ‘lack of consolidation in the society’ can lead to recession and financial turmoil.  According to an opinion poll by the Public Opinion Foundation, the ruling party has the support of 39% of voters.  When the party won parliamentary elections in 2007, it gained 64% of the vote.   The New York Times has a report on how smartphones are allowing ordinary citizens to capture evidence of electoral malfeasance.  Charles Clover from the FT looks at the trend of booing which has developed over the past month as a manifestation of popular discontent.  This Moscow Times op-ed offers some alternative explanations as to why Putin faced a barrage of catcalls at Sunday night’s boxing match.  ‘After 12 years of pulling the PR levers and blowing a lot of smoke, the “Wizard of Russia” was finally exposed by mixed martial arts fans, who — like Toto in the final scene of “The Wizard of Oz” — pulled back Putin’s curtain, revealing a meek, ordinary man’.

ITAR-TASS reports that the investigation into the tax evasion case against deceased Hermitage Capital Management lawyer Sergei Magnitsky, which has raised criticisms that the Interior Ministry has been ‘spitting on the grave of a dead man’, will be extended.  Moscow Mayor Sergei Sobyanin has reiterated that he will continue to oppose the holding of gay pride events in the Russian capital, on the basis that most Muscovites would be against them.  RFE/RL reports on how a protest against a lack of social allowances in Kirov became a political demonstration after local authorities refused to allow the rally which was attended by dozens of young parents.  Jailed Yukos founder Mikhail Khodorkovsky has apparently expressed hope of seeing German director Cyril Tuschi’s documentary about his clash with the Kremlin, which, as Time Magazine reports, has faced a slew of attacks by the Russian authorities.

Russian newsreader Tatyana Limanova, who appeared to give Barack Obama the finger during a broadcast, has been fired, though claims have circulated that she was in fact swearing at her co-workers, as opposed to the US President.  President Medvedev has continued his onslaught against Washington’s missile defense plans, arguing that the US ‘imposed’ its plans on European countries.  Federal officials in the US claim they have found no evidence to support an initial state report that Russian hackers caused a pump at an Illinois water plant to fail this month.  The BBC reports on how Russian computer programmers have created a criminal industry of selling hacking software.

PHOTO: Experts estimate there are less than 2,000 Arctic walruses in the wild. (Vladimir Filonov/MT)