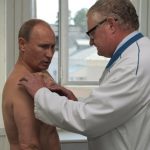 Howard Amos says that Russia’s reputation as a reliable arms supplier is damaged now as a result of its responses to the crisis in Libya, and examines the significance of the ‘well over $4 billion’ that Russia currently has at stake in active arms contracts with Syria.  The Foreign Ministry is calling for the U.N. to take charge of rebuilding efforts in postwar Libya.  Prime Minister Vladimir Putin finds a $15 billion case of mismanaged healthcare funding to be the perfect occasion for taking off his shirt, as public approval ratings for President Dmitry Medvedev, recorded by the Levada Center, hit an all-time low.  Putin is accusing opposition parties of selling parliamentary seats, lashing out against broad opposition to his plan to make primaries mandatory for all parties.  The Prime Minister says he is ‘grateful’ for a certificate granting him free taxi rides for life.  Valentina Matviyenko’s fellow candidates in the ‘political circus’ that constituted last week’s municipal elections ‘included a cloakroom attendant [and] a railway worker’.

A lawyer for Dmitry Pavlyuchenkov, the former police officer currently being held in detention in connection with the murder of Anna Politkovskaya, points out that her client has not yet been charged, as Pavlyuchenkov himself denies wrongdoing.  On the luxurious lives of inmates who can afford to pay their way through the prison system.  Interior Minister Rashid Nurgaliyev says that police corruption has been eradicated, with a reported 183,000 officers losing their jobs during recent reassessments.  Two Moscow police officers have been arrested for attempting to steal the proceeds from an apartment sale.

Georgian breakaway region, Abkhazia, holds elections this morning, with separatist Sergei Pagapsh expected to be replaced by one of three candidates, none of whom want reunification with Georgia.