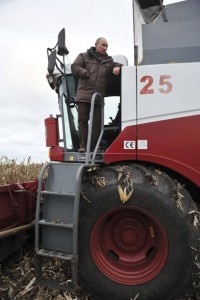 20 people have been detained for taking part in an unsanctioned Moscow rally protesting the upcoming elections.  ‘What is the point of pretending this is an election? It’s a charade. Don’t interfere with it, just don’t pay respect to the charade,’ says Garry Kasparov.  Opposition activists have rallied in St Petersburg to show support for Mikhail Khodorkovsky.  Russia’s plans to construct a paved road to improve access to an elite ski resort through the Shaposhnikov State Caucasus Nature Biosphere Preserve – which is a UNESCO World Heritage Site – have environmentalists up in arms.  A database containing the full names, telephone numbers and other personal data of 1.6 million mobile users was leaked online this week; in its defense, MTS insists that most of the information is out of date, and blamed law enforcement agencies.

The U.S. has not taken kindly to Russia’s tit-for-tat officials blacklist (which is apparently longer than the so-called Magnitsky List).  A Republican speaker has criticised President Obama’s ‘reset’ as ‘an attempt to restore Soviet-style power and influence’, and says that Russia should not be considered for WTO membership until it settles ongoing border disputes with Georgia; presidential aide Arkady Dvorkovich says that Georgia’s demands are ‘impossible’.  NATO is still trying to soothe Russia’s worries but won’t budge on missile defense, refusing Moscow’s requests for its planned shield to be run jointly.  Vladimir Putin’s lip service to populism even extends to ‘new industrialization’, says Anders Aslund.

The case against nationalist activist Dmitry Dyomushkin may give the authorities enough reason to ban next month’s sanctioned Russian March, ‘the event of the year for nationalists’.  Alexei Navalny’s pothole-tracking website, a joint effort with RosYama.ru, has launched.  Yulia Latynina writes on the lawsuit that Navalny lost to Vladlen Stepanov, which is ‘good news’, she says, because it ‘publicized some very important information’.  Russia views the downfall of Muammar Gaddhafi gravely, not just due to the loss of lucrative contracts in Libya, but also because ‘the Kremlin has been wary of the Arab Spring rebellions […] seeing them as an extension of the “colored revolutions” that brought pro-Western regimes to power in Georgia, Ukraine, and Kyrgyzstan in 2003-05,’ says RFE/RL.

It’s official: Putin and Medvedev are the tandem that harvest corn together.

PHOTO: Russian Prime Minister Vladimir Putin stands on a combine harvester during a visit to a farm in the Stavropol region in southern Russia October 25, 2011. REUTERS/Alexei Nikolsky/RIA Novosti/Pool