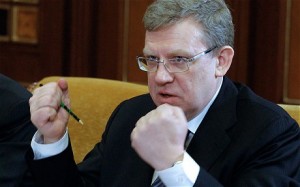 Shock waves rippled through the Kremlin yesterday as Alexei Kudrin, the longest-serving finance minister in the G8, widely seen as the architect of Russia’s financial stability, resigned.  The decision came following an icy televised dispute (a video of which can be seen here) with President Medvedev over comments Kudrin made on Sunday, in which he expressed his refusal to serve under the current President in a new government.  At a meeting of senior officials in Dimitrovgrad, Medvedev told Kudrin that ‘nobody has revoked discipline and subordination‘ and added that if the finance minister disagreed with his policies, he had ‘only one option, and you know it: to resign’.  Did he jump or was he pushed? wonders the Independent.  This report suggests that Kudrin’s revolt may be the result of being passed over for the role of Prime Minister in the next government. It seems unlikely that his exit spells the end of his political career; RFE/RL presents some other possible configurations of the ruling elite: ‘The idea looked like this: Putin as president, Kudrin as prime minister, and Medvedev would be out, say, as head of the Constitutional Court. That version is still possible, but only in a much longer-term perspective’.  Opposition politician Boris Nemtsov told the Moscow Times that Putin’s long-term ally could yet become chairman of the Central Bank or Putin’s special adviser on the economy.  Fears for the security of political system as a whole, without the guarantor of financial stability, have been raised.  The Power Vertical’s podcast, which examines all of the weekend’s announcements, makes for indispensable listening.

This article argues that Kudrin’s rebellion reveals how little power Medvedev actually wields.  The FT suggests that given the job of Prime Minister involves making budget cuts to the public sector and unpopular pension and tax reforms, under Putin’s Presidency, ‘Medvedev will become a convenient fall guy’.  The last leader of the Soviet Union, Mikhail Gorbachev, has warned Russia risks wasting six years if, or rather when, Vladimir Putin returns to the presidency.  ‘Vladimir Putin is a dangerous man, but a splendid czar‘: a Washington Post op-ed dissects the ‘genius’ of Putin’s strategy as national leader.  The Washington Post suggests that the current Prime Minister will be less clement in terms of relations with the US than Medvedev.  That change in attitude might be little more than superficial, argues the New York Times.

Russian officials are apparently ‘incredulous’ about the US visa blacklist prompted by the death of Sergei Magnitsky.  Ria-Novosti reports that two doctors who were charged with negligence causing death in the Magnitsky case have now been hospitalized, which prevents them from taking part in investigative activities.  Their ‘illnesses’ are being investigated.  A British law firm hopes to make a groundbreaking legal bid to bring a number of private prosecutions against Belarusian leader Alexander Lukashenko over human rights abuses.  In the second high-profile murder in the Moscow region in a month, an official in charge of finances in the city of Podolsk has been shot dead outside her house. In  late August, Yevgeny Dushko, mayor of the Moscow region city of Sergiyev Posad, was also shot dead; it has been suggested that the cases are linked.  The Telegraph reports on a graft scandal in the Russian Orthodox church.