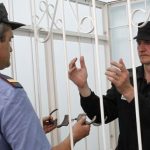 The Russian government has stated that it will ‘not leave unanswered the unfriendly steps’ taken by the United States in approving sanctions against those implicated in the death of Hermitage lawyer Sergei Magnitsky.  The First Deputy of Russia’s International Affairs Committee has argued that Russia should limit its reaction to the U.S. State Department black list to strong rhetoric.  What prompted NATO envoy Dmitry Rogozin to brand two Republican senators ‘monsters of the Cold War‘? Find out here. Five activists from the Moscow Defender movement who attempted to prevent the demolition of a historical mansion claim to have been beaten by private security guards, RFE/RL reports.  A traffic police officer has reportedly broken the arm of a fellow police officer, whom he caught speeding, after failing to extract a bribe from him.  The business partner of former Yukos CEO Mikhail Khodorkovsky, Platon Lebedev, has been denied parole, meaning he will remain in prison until the end of his sentence in 2016.  The court apparently rejected the plea on the grounds of two breaches of prison rules, one of which was the loss of a pair of trousers. Khodorkovsky has pledged he will go ahead with his request for parole despite Lebedev’s failure.

Blog service LiveJournal.com, which has been beset by technical problems this week has admitted its problems are the work of hackers. In the latest in a spate of leaks of information on the internet, Russia’s government’s competition watchdog has denied that classified government documents were made available though Google search.   The Wall Street Journal reports on how the Kremlin plans to check the flow of information.  Meanwhile the Telegraph examines how Russia is using search engine optimisation to clean up the reputation of nuclear fallout town Chelyabinsk.

Several unidentified sources quoted by Reuters have suggested that Prime Minister Vladimir Putin is leaning towards a return to the Presidency in next year’s election.  Meanwhile tech-friendly President Medvedev sees digital voting as a way of improving the electoral system.  Putin’s All-Russia people’s front attracts some fans in the ex-Soviet zone.

On the militarization of the Caspian Sea, as Russia, Iran, Azerbaijan, Turkmenistan and Kazakhstan fight for access to the strategic body of water.  Sergei Karaganov in the Moscow Times outlines his plans for ‘Projet Siberia’: a new approach to Russia’s eastern horizons.  Fetch the engines: Moscow braces itself as temperatures rocket, hoping to avoid the smoke-fuelled deaths of an estimated 55,000 people last summer. Uncovering the mysteries of the final hours of Russia’s last Tsar.

PHOTO: Former Yukos co-owner Platon Lebedev attending a court hearing into his parole request in the Arkhangelsk region town of Velsk on Wednesday. The court ruled late at night that he was not eligible for parole because of two breaches of prison rules, including the loss of a pair of trousers. (Tatyana Makeyeva / Reuters)