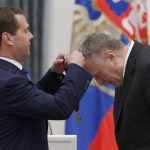 ‘The conventional wisdom in the Moscow punditocracy appears to be moving in the direction of Putin returning’: Brian Whitmore unravels the rumors surrounding Putin’s possible return to power, but retains his own, somewhat different theory.  High-level presidential advisers have warned that President Dmitry Medvedev’s exit from the Kremlin could provoke a financial collapse.  Meanwhile, confidence ratings in the tandem are dropping, says a new survey by the Public Opinion Foundation and 53% of people polled by Levada believe that upcoming State Duma elections will be rigged.  ‘Mr Medvedev has promised many things since he was elected in 2008 and only a few of them have actually come to pass’: the failure to investigate the Magnitsky case properly being a shining example of this, says the Telegraph. On the issue of US sanctions against Magnitsky case officials, which the Moscow Times argues is imperiling the reset, Russia apparently has its own own blacklist to introduce against US officials.  Relations do not stand to benefit from a classified report by American intelligence officials which suggests that a Russian intelligence officer may have been the mastermind behind a series of bomb attacks in Georgia last year, including the September 22 attack near the US embassy.  Deputy Foreign Minister Grigory Karassin has said that the claims will be treated with ‘due seriousness’ though he also implied that the suggestions were unfounded.  ‘The Obama administration is caught between a rock of realpolitik and a hard place of its and Congress’s human rights agendas‘: analyst Ariel Cohen sums up Washington’s Russia quandary.

In a rare sign of internal opposition, a senior United Russia deputy offered to pay for the missing trousers which cost Platon Lebedev his appeal for parole. Moscow’s top archaeologist Leonid Kondrashev had an unfortunate encounter with some eggs when caught up in a freedom of assembly protest in Triumph Square.  Today’s meeting of the presidential commission on human rights will apparently focus on ‘environmental rights of citizens’. Denis Solopov, a member of the Antifa anti-fascist group, who is wanted in Russia on charges relating to Khimki forest protests, has been granted political asylum in the Netherlands.  A former contestant of reality TV show ‘Dom-2’ may be a rival candidate to St. Petersburg Governor Valentina Matviyenko in an early election, apparently designed to usher the current governor into the role of speaker of the Federation Council.   RFE/RL reports on how the tile business is booming in Moscow and it’s not simply of matter of bathrooms.

Today Poland will release the findings of its independent investigation into the Smolensk air crash which killed the President last April: it is anticipated that it may place some blame on Russia.  The head of the Georgian Orthodox Church Catholicos Ilya II has urged Patriarch Kirill to help reconcile the two countries.  The Independent reports on how tycoon Suleiman Kerimov hopes football can bring change to Dagestan.  Police say a village leader and an elderly couple have been killed in the restive republic, as well as the official in charge of anti-Islamist propaganda.

‘Trying to separate people from their favorite drink with a decree is an exercise in futility’: Tatyana Tolstaya explains why the new law on beer will not deter Russia’s unquenchable drinkers.

PHOTO: Medvedev, pictured decorating LDPR leader Vladimir Zhirinovsky with the Order for Services to the Fatherland on Thursday, has ordered a blacklist.  (Denis Sinyakov / AP)