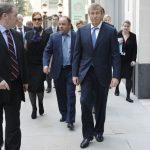 Britain has rebuffed claims that it held an unofficial visa blacklist on at least 60 Russian officials implicated in the death of Hermitage Foundation lawyer Sergei Magnitsky.  Nonetheless, the company’s founder Bill Browder is now seeking to persuade ten EU governments, including Germany, France, Poland, the Netherlands and the Czech Republic, to establish a similar blacklist.  ‘I am confident that these 10 countries will do what’s required in the end’, he told reporters.  In response to allegations from a chief UK prosecutor that Russia ordered the execution of Alexander Litvinenko in 2006, the spokesman for the Russian Embassy in London has penned a letter to the Sunday Times in which he states that if Britain provides evidence to that end, Russia will study it.  Former Yukos executive and lawyer Vasily G. Aleksanyan has died at the age of 38 at his Moscow home.

Russia’s For Human Rights movement has lodged a complaint with Prosecutor General Yury Chaika after United Russia denied accusations of violating electoral laws in the ongoing parliamentary election campaign.  As part of its election program, the Russian Communist Party has suggested that ethnicity be once again indicated in the passports of Russian citizens; the clause was dropped in 1997 after complaints that it fanned a climate of ethnic discrimination in Russia.  Extremism and xenophobia watchdog Sova has stated in a review that more than 100 people have fallen victim to hate crimes in Russia so far this year.   Different grass roots campaigns throwing ‘small darts at United Russia’ are how many opposition activists are coming to terms with the era of increased authoritarianism Putin’s return heralds.   Belarussian journalist Irina Khalip has appealed to the wives of Dmitry Medvedev and Minister Vladimir Putin as ‘wives and mothers’ in a plea to have her husband, a former presidential candidate jailed by President Alexander Lukashenko, released from prison.  ‘Three and a half years ago, the rock bands Mashina Vremeni and Chaif led the celebrations for Dmitry Medvedev’s election as president with a gala concert on Red Square. Now they will not‘.  The frontman of Mashina Vremeni (Time Machine) tells the New York Times that he had been ‘incorrigibly naïve’ to invest his hopes in Mr. Medvedev.

Finally a success for Glonass: a Soyuz booster rocket has reportedly successfully lifted a satellite for the troubled system, which Russia hopes will rival GPS and Gallileo, completing the network needed to insure full global coverage after it comes on line.   Military reform continues to have a political impact: President Medvedev has dismissed a general who reportedly disagreed with the Kremlin’s $620 billion upgrade.  The U.S. ambassador to Russia has been quoted as saying he is confident Russia and NATO will reach an agreement by May to cooperate on missile defense despite Moscow’s deeply-entrenched misgivings.

The Guardian reports on how the BBC’s cult television show Life on Mars will have a Russian remake.