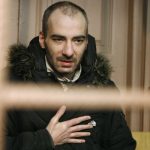 Human rights activists, among them Valery Borshchyov and Lev Ponomaryov, have stated in no uncertain terms that the death of former Yukos vice president Vasily Aleksanyan is akin to murder, since the AIDS sufferer’s condition was, they argue,  worsened by the three years he spent in prison on what ‘politically-motivated’ charges.  24 people, members of the Other Russia opposition party and civil activists, have reportedly been detained following a protest in Moscow which forms part of their “An Election Without the Opposition is a Crime” campaign.  Vladimir Putin’s spokesman Dmitry Peskov is apparently attempting to woo Russia’s middle-class, intellectual voters, the kind of ‘people who sit in expensive restaurants where there are no free tables left, eat expensive Italian meals costing 1,200 roubles ($36) per plate and fret about the fate of their country’.  He obviously believes mockery will get you anywhere.  Following on the heels of the announcement that the party would seek to restore ethnic indicators on passports,  Communist leader Gennady Zyuganov has apparently openly declared that his party will seek the nationalist vote in the State Duma elections.  ITAR-TASS considers whether a Fair Russia could fare better than the Communists, thank to protest votes?On the political implications of Putin’s grand plans for a Eurasian Union.  The Telegraph sees Putin’s inner imperialist blooming: ‘His dream would see Russia again dominating about one fifth of the earth’s surface with an internal market of almost 300 million people.’  The Guardian points out that Putin used the article in which he outlined his vision to make a dig at sometime ally Ukraine: ‘Some of our neighbours explain their reluctance to participate in advanced integration projects in the post-Soviet space by saying it allegedly contradicts their European choice.’

Russia has vetoed a UN resolution to punish its trading partner Syria for the bloody repression of civilian discontent.  The veto, seconded by China, has apparently ‘outraged’ Washington.    Russian First Deputy Prime Minister Igor Shuvalov has said nonetheless that Russia is seeking  stronger ties with the U.S. and will not ignore the reset.  Russia and Ukraine are apparently negotiating the possibility of a joint missile defense system.  Moscow is in discussions with Azerbaijan on extending the lease of the Gabala missile early-warning radar.

Russian lawmakers have given first-round approval to a bill that would make penalties for paedophilia harsher, including the introduction of obligatory chemical castration or life sentences in cases that involve repeated offenses.  RFE/RL reports on how mothers in a village in central Russia are refusing to send their sons to serve in the army following the mysterious death of a local conscript, Ruslan Aidarkhanov, who they say may have been a victim of hazing.  Following his televised punch up with Sergei Polonsky, investigators have opened a criminal file on the billionaire Alexander Lebedev, for causing ‘bodily harm’ to his unwitting adversary.