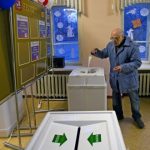 As exit polls had predicted, with 95% of votes counted, it appears that United Russia has won 49.7% of the vote in yesterday’s parliamentary elections, marking its worst showing since 2003.  The Communists appear to have been the main beneficiaries of UR’s decline, with their share of the vote rising to 19.1% from 11.6% in 2007.  A Just Russia won 13.1%, up from 7.7%, and the nationalist LDPR won about 12%, up from 8.1%.  The Moscow Times has been running a live blog with constant updates on the count, which can be viewed here.  On the basis of these results, United Russia is likely to have 238 seats in Russia’s 450-seat State Duma, says Central Election Commission chief Vladimir Churov.  A ‘glum’ Vladimir Putin told the media, ‘this is an optimal result which reflects the real situation in the country’.  According to the Telegraph he looked ‘visibly peeved’, as he argued that this result would ‘guarantee stable development of our country‘.  President Medvedev also attempted to gloss the blow to the party, arguing that the fact the party will have to participate in coalition agreement is ‘normal, this is parliamentarianism.  This is democracy.’

With the number of allegations of electoral fraud, many would contest that.  Among the numerous complaints, that of carousel voting and ballot falsification are mentioned by RFE/RL.  The Moscow Times reports on the frosty welcome received by election monitors and how one of its own reporters was ousted from a polling station.  The newspaper also reports on voting in non-public polling stations, for example in prisons and hospitals, where it is alleged a considerable amount of vote-rigging goes on.  Websites belonging to harassed election watchdog Golos, online news portal Slon.ru and LiveJournal were rendered inaccessible at certain points over the weekend, suggesting interference by hackers.  ‘The election also seemed to mark a portentous new chapter in Russian cyberpolitics’ says the NY Times.  Putin-friendly newscaster Tina Kandelaki complained that her shows had been rejected by NTV, a sign, she says, that the Kremlin was ‘nervous’ before the elections.

Yesterday riot police arrested about 100 would-be protesters at Moscow’s central Triumfalnaya Square, who were subsequently released. Among them was opposition leader Sergei Udaltsov, leader of the unregistered Left Front party, who was arrested before he arrived at the unsanctioned rally.  The Right Cause party has said it will challenge the results of voting in the elections of legislative assemblies of St. Petersburg and the Moscow region.  Yesterday evening, Ivan Melnikov, first deputy chairman of the Communist Party’s central committee, told journalists that ‘we are facing falsification on a massive scale’.  Edward Lucas, the Economist’s international editor, talks to the BBC about why the ruling party has fallen from grace.  A political technology glitch, economic precariousness, and the rise of the Internet are all cited as possible reasons why UR has seen its popularity decline in this election, says an analysis by RFE/RL.

In other news, talks between supporters of South Ossetian opposition leader and former presidential candidate Alla Dzhioyeva and Russian Presidential Administration head Sergie Vinokurov, have apparently failed.  Tensions have risen between the US and Russia over Washington’s ‘failure’ to inform Moscow about the death of a Russian-born toddler adopted by an American couple.  Deputy Prime Minister Dmitry Kozak has reportedly suggested that St Petersburg’s controversial new anti-gay legislation should be extended to the whole of Russia.  Errant space probe Fobos Grunt has been abandoned.

PHOTO: A pensioner dropping his ballot into a box at Polling Station No. 2973 near metro Oktyabrskoye Pole on Sunday, December 4, 2011 (Vladimir Filonov/MT)