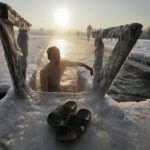 TODAY: Russia vetoes Syria resolution to widespread criticism; protesters both for and against Vladimir Putin take to the freezing streets of Moscow; Ivanov predicts protests will die down next month; new Putin article calls for grassroots representation.

Russia and China have vetoed the latest U.N. Security resolution calling for Syrian President Bashar al-Assad to relinquish power, prompting a number of outraged responses.  Qatar’s foreign minister said that it gave Assad ‘a license to kill’; U.S. Secretary of State Hillary Clinton called it a ‘travesty’, the U.S. ambassador to  the U.N. said she was ‘disgusted’; and the British foreign secretary warned that Russia and China would be ‘held responsible’ for ensuing violence in Syria, as protesters stormed Russia’s embassy in Tripoli.  Is Russia seeking a ‘controlled demolition’ for Assad’s regime?  The Guardian compares Russia’s Syria stance with British/U.S. response to calls for Israel to stop attacking Lebanon in 2006.

The numbers of both pro- and anti-Putin protesters who took to Moscow’s streets over the weekend (in temperatures of -22 degrees celsius) are a source of contention, with organisers and officials on both sides documenting crowds of between 30,000 and 140,000.  The Moscow Times says it has evidence that pro-Putin demonstrators were paid to march.  Smaller gatherings were held in other Russian cities; ex-pat demonstrations were held in solidarity in London and New York.  How will the Kremlin respond to the anti-Putin movement?  ‘We want to choose leaders who listen to us.’  Sergei Ivanov predicts that the protests will die down in early March, after the first round of voting.

Putin’s latest campaign article calls for government institutions to pay attention to civilian voices, and outlines suggestions for dealing with corruption.  The Guardian has images here; RFE/RL collected images of the best protest signs.  The ‘straightforward honesty and marching beat’ of a former paratroopers’ song has made it a refrain on current protests.  Investigators are claiming that December footage purporting to show election violations was ‘distributed online from the United States’.

The navy will reveal its 30-year plan to strengthen its forces this June.  Russia is playing down concerns about a fire at a Moscow nuclear research center.  Russia’s favored South Ossetian presidential candidate has stepped down from next month’s vote.

PHOTO: A Russian man climbs out from an ice hole after swimming in a lake on the outskirts of St. Petersburg, Russia, Sunday, Feb. 5, 2012. The temperature in St. Petersburg hit -23 Celsius (-9.4 Fahrenheit). (AP Photo/Dmitry Lovetsky)