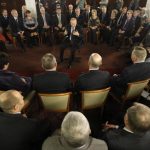 Yesterday saw a second wave of protests sweep across Moscow, where hundreds of people gathered to call for an end to Prime Minister Vladimir Putin’s rule.  They were confronted by hundreds of pro-Kremlin demonstrators and  Interior Ministry troops who were deployed across the city to disperse the unauthorized gathering quickly.  More than 550 protesters were detained by riot police.  Among their number were opposition leader Boris Nemtsov and Gazeta.ru observer Bozhena Rynska.  Yesterday morning a court sentenced prominent anti-corruption blogger Alexei Navalny to 15 days in jail for obstructing the course of justice in Monday’s protest.  On the Power Vertical podcast, Brian Whitmore discusses the post-election political fallout and the ascendant role Navalny plays in the opposition movement.  The Committee to Protect Journalists has released a statement condemning the ‘heavy-handed actions by Russian authorities’ who have detained at least six journalists covering the protests that followed Sunday’s parliamentary election.

‘The reaction to last weekend’s fraud-tainted parliamentary elections has been like nothing I have seen since the early 1990s’ says Maxim Trudolubov, in a piece which highlights the frustration ordinary citizens feel with a climate of economic lawlessness.  Russia’s ruling elite has ‘a virtual carte blanche to steal’, says Yulia Latynina.  One analyst quoted by Reuters argues that the ire of those who came to protest was directed not at United Russia, but rather at Vladimir Putin himself.  In an apparent attempt to allay concerns, Putin has promised a government reshuffle after he is elected president next year.  Bloomberg considers how Putin may employ his parliamentary opposition to get behind United Russia policies.  Vladislav Surkov sees the protests as a manifestation of the fact that ‘a mass liberal party is lacking’ in the current political system.

U.S. Secretary of State Hillary Clinton has, for a second day running, voiced her concerns about possible electoral fraud, describing the elections as ‘neither free nor fair’.  Germany reportedly concurs.   The European Union’s foreign policy chief Catherine Ashton has described her concerns about the harassment of the media and election monitors.  Bloomberg’s The Ticker examines United Russia’s electoral successes in psychiatric hospitals.  President Medvedev has instructed the Central Election Commission to investigate alleged vote rigging.  The President also said pointedly in response to international criticisms, ‘the issue of Russia’s political system is not their business‘.  The Russian Foreign Ministry has called comments by senior White House officials about Russian parliamentary elections ‘unacceptable’.

U.S. senator John McCain has warned Putin that Russia may soon witness an Arab Spring of its own.  This is unlikely, says David Hearst in the Guardian.  Sweden’s prime minister has denied a report claiming that an adviser in his country’s Moscow embassy met with opposition activists ahead of Sunday’s State Duma elections to foment large-scale nationwide protests.