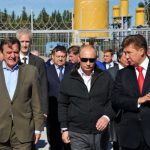 Relatives of deceased Hermitage lawyer Sergei Magnitsky have requested that the tax evasion case against him prior to his death be dropped; the case was reopened in early August after the the Russian Constitutional Court ruled that the death of a defendant must not lead to the closure of an investigation.  Interior Minister Rashid Nurgaliyev has pledged to enforce harsh disciplinarian action on any police officers found guilty of involvement in Magnitsky’s untimely death in pre-trial detention.  RFE/RL reports on the reigniting of prison writing from high-profile detainees Yulia Tymoshenko and Mikhail Khodorkovsky.  Deputies of the Fifth State Duma have begun their fall session; the Moscow Times reports on the initiation of some pre-December election heated debate.  Igor Yurgens, head of the Institute of Contemporary Development think tank sets out his strategy for how President Medvedev could become Russia’s modernizing superstar, the Kremlin’s answer to Lee Kuan Yew, in a Moscow Times op-ed.  ‘My question is: Does Medvedev have even one of Lee’s traits? There is as much in common between Medvedev and Lee as there is between the climate and size of Singapore and Russia,’ retorts Yulia Latynina. The weekend’s military deal with Tajikistan has secured Russia’s Central Asian presence for another 49 years: but what can Dushanbe demand in return, wonders this article?  Bloomberg reports on how the Arab spring has precipitated the tightening of military bonds between Russia and the CIS.  This analysis considers why the Syria situation is proving problematic for Russia.  ‘Policymakers in Beijing and Moscow are likely to seek to ensure that they do not end up on the losing side elsewhere in the region, particularly in Syria’, comments James M. Dorsey.  Following the crash of another MiG31 which killed both pilots, Russia has grounded the whole of the Soviet-era fleet.

In a case which has drawn attention to Russia-US adoption controversy, a couple from central Pennsylvania has gone on trial for the death of their 7-year-old adopted son from Russia, allegedly of parental abuse.  Australia and Russia pool their chances for Olympic success.