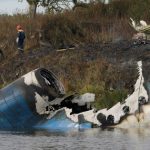 In the latest in a series of fatal crashes in Russia, a plane carrying one of the country’s top ice hockey teams, Lokomotiv Yaroslavl, has crashed, killing 43 of the 45 people on board, decimating the team.  The two survivors of the Yak-42 disaster are critically injured.  ‘This is the darkest day in the history of our sport. This is not only a Russian tragedy, the Lokomotiv roster included players and coaches from 10 nations’ said International Ice Hockey Federation President Rene Fasel.  Russia’s worst sporting tragedy in decades highlights, as this article points out, Russia’s dubious airline safety record.  Poor quality of aviation fuel is a possible cause of the accident, according to an aviation industry source quoted here.  US NHL coach Dave King remembers players in Russia referring to one particularly decrepit charter airplane as ‘Pterodactyl Air’.  President Medvedev has arrived in the city of Yaroslavl to pay his respects at the crash site.

Kommersant reporter Oleg Kashin, who suffered a severe beating last November allegedly as a result of his professional activities, has been awarded the German Prize for the Freedom and Future of the Media award; the same award that Anna Politkovskaya won in 2005, a year before her murder.  Novaya Gazeta newspaper editor-in-chief Dmitry Muratov has told a round table discussion that he hopes testimony from the people involved in or related to the Anna Politkovskaya murder case may help to illuminate other crimes against journalists in recent years.  The Justice Ministry has ordered prison doctors to check the health of prisoners held in solitary confinement as the case of the death in custody of lawyer Sergei Magnitsky receives international attention.  The Other Russia reports on how a St Petersburg woman has been prevented from working as a census taker because of her son’s opposition activism.  Opposition activists in the town of Zheleznodorozhny hope to use the visit of Queen Margrethe II of Denmark to draw attention to pollution problems caused by a local Danish factory and corruption issues across the town as a whole, says the Moscow Times.

At a meeting with his French counterpart Alain Juppe in Moscow, Foreign Minister Sergei Lavrov has stated that international support for the Syrian opposition could provoke ‘new bloodshed’ in the country.  France’s Foreign Minister apparently urged his Kremlin double to change his position on the uprising in the Middle Eastern state and support U.N. Security Council sanctions on President Bashar al-Assad’s government.  Sergei Lavrov has reportedly criticized NATO’s refusal to join anti-drug efforts with the CSTO.  Reuters considers whether David Cameron’s upcoming visit to Moscow, the first by a British Prime Minister since the murder in London of former spy Alexander Litvinenko, in 2006, reflects a thaw in relations.   A U.S. court has sentenced Russian pilot Konstantin Yaroshenko to twenty years in prison in a drug trafficking case.  Moscow has condemned the verdict against the  pilot as excessively severe .

PHOTO: The fuselage of the charter plane carrying the Lokomotiv hockey team came to rest partly in a tributary of the Volga River. (Misha Japaridze/Associated Press)