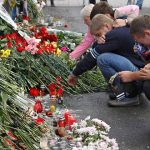 Thousands of mourners have gathered outside Arena 2000 in Yaroslavl to pay tribute to the players who died in Wednesday’s plane crash.  ‘In an extraordinarily dark coincidence, the crash came the day before a showpiece international forum attended by several world leaders was to open in Yaroslavl. The venue? Arena 2000, the home stadium of the Lokomotiv side’: the Independent reports from the scene of the forum which has not been cancelled.  ‘But many of the mourners outside dismissed the notion of coincidence, repeating their logic to one another numbly: If the Kremlin had not decided to hold the event in Yaroslavl, the team would have opened the season at home instead of flying to Minsk’, says the New York Times.  President Medvedev has called for immediate changes to Russia’s aviation industry, among them reducing the number of airlines and buying foreign jets.  Russia’s Kontinental Hockey League could be less appealing to North American players, a sports agents has told Bloomberg.  In the meantime, a passenger plane has been forced to return to the airport in Russia’s northern port city of Arkhangelsk after losing cabin pressure. In one of the last major addresses of his presidential term, President Medvedev has warned against xenophobic rhetoric infiltrating the political mainstream.  Despite suggestions that the speech could divulge information his future plans, Medvedev did not make any statements about whether he would be running for a second term as President.  The President also took the opportunity to assert the necessity of protecting the ‘rights of the people’ and ‘criticism’.   RFE/RL reports on a picket by 300 protesters from settlements near Moscow who claim that a local dump is polluting the environment.  A whistleblowing army major who used a Youtube video to expose alleged illegal activities in the Russian Far East has been sentenced to four years in prison for beating a warrant officer and a soldier.

David Cameron’s visit to Moscow next week will represent the first contact between Vladimir Putin and the UK since a terse meeting with Tony Blair in 2007.  The lack of contact reflects the low ebb which UK-Russia relations reached following the death of Alexander Litvinenko in 2006, says Bloomberg.  ‘The decision to accept President Dmitry Medvedev’s invitation – and the fact that it was offered in the first place – showed that both countries have acknowledged their mutual need to coexist and co-prosper‘.  The BBC has a video interview with Andrei Lugovoi, suspected of the murder of Litvinenko, the man at the heart of the diplomatic tussle.  According to this article, Moscow still hopes for a ‘political settlement’ in Syria.  Dmitry Medvedev has waded in on the Middle East again, stating that Russia is reportedly dissatisfied with the implementation of the UN resolution on Libya, arguing that NATO has abused the mandate of the international community in the country.

The Washington Post reports on how the residents of Kalmykia have appealed to President Obama for help to improve their poverty-stricken medical facilities in the region.