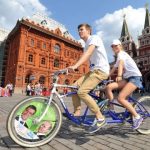 The International Crisis Group is urging Russia and Georgia to widen their dialogue past the former’s efforts to join the World Trade Organization.  Unlikely that this will materialise under current power structures, if Sergei Lavrov is to be believed: the Foreign Minister says that Russia ‘will have no dealings’ with Georgian President Mikhail Saakashvili, who he referred to as ‘a pathological case’.  A group of architectural preservationists who were trying to stop the demolition of a 19th-century building in Moscow were beaten by ’50 masked men’.  The attackers apparently prevented local residents from helping, and refused access to paramedics who had arrived to help the injured.  Armenia is the fifth-most pro-Russian country in the world, says RFE/RL.

The head of the F.S.B. alleges that far-right youth movements in the Far East have started using explosives.  U.S. Democrat Senator Ben Cardin writes in today’s Washington Post, calling for justice for Sergei Magnitsky and describing his case as ‘but one of many gross violations of human rights going unpunished in Russia’.  Young activists for both Medvedev and Vladimir Putin joined forces yesterday for a tandem bike-ride.

Another day, another plane crash, this time in the Far East.

PHOTO: Supporters of Russian President Dmitry Medvedev and Prime Minister Vladimir Putin ride a tandem decorated with their pictures during a rally near the Kremlin in Moscow. (Yahoo News)