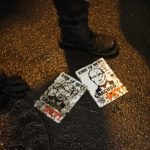 Ekho Moskvy radio station’s editor-in-chief, Alexei Venediktov, and his deputy will both resign from the board of directors in protest after Gazprom, the majority owner of the station, demanded that two other independent board members be ousted. The news has triggered fears that the station’s anti-Kremlin content will be further censored in the run-up to next month’s elections.  Alexei Venediktov meanwhile has been called in for questioning over the station’s labour practices.  Russia’s MTV music channel has apparently had its new political talk show cancelled, before a scheduled filming of Alexei Navalny.  Navalny has given Vladimir Putin’s rule 18 months.  The Irish Times reports on ‘the distinct chill’ currently surrounding the U.S. embassy in Moscow.  An official involved in the expulsion of French journalist and author Anne Nivat has resigned over the issue, says this report; others suggest that he was fired.  Opposition leaders from Parnas and Yabloko, former Finance Minister Alexei Kudrin, Alexei Navalny and Mikhail Prokhorov are discussing the possibility of coming together to form a coalition ‘megaparty’ ahead of the 2017 parliamentary elections.

A court in Smolensk has overturned the verdict for United Russia activist Taisia Osipova, who had been sentenced to ten years in prison.  Moscow City Hall says that a pro-Putin march planned for February 23 is too large, and should be abandoned: ‘an ominous sign for Team Putin’?  Many have criticised a television debate between stand-ins for Prokhorov and Vladimir Putin as absurd.  Some suggested that Prokhorov’s stand-in (his sister) would have made a better candidate.  Vladimir Churov says there is still no proof of multiple voting during last December’s elections.  The head of the FSB says that the number of terrorist attacks halved in 2011 from the previous year.

Bloomberg puts Russia’s relationship with Iran into historical and geographical context.  It has emerged that Russia was facing a nuclear disaster last year with the fire on the Yekaterinbug nuclear submarine, the threat of which was kept quiet at the time.  The Guardian reports on the Russian science project to drill into the Antarctic Lake Vostok.  The ‘prehistoric’ water presented to Vladimir Putin earlier this week, sparking a series of ‘dinosaur drink’ stories, apparently did not actually come from Lake Vostok as claimed.  Yulia Latynina analyses the recent South Ossetian elections.  Former Soviet republic Abkhazia’s struggle to win friends has led it to a partnership with the world’s smallest republic, Nauru.

One of the most popular smartphone apps involves building Russian democracy by developing ballot boxes for an electorate played by sheep.  Vladimir Putin has suggested that Moscow take after London’s Hyde Park Corner and designate a space for free public speaking.

PHOTO: Two posters with a portrait of Russian Prime Minister and presidential candidate Vladimir Putin with words reading “another 13 years? No. Thank you!” lies on the pavement after an unsanctioned opposition anti-government rally in front of the Central Election Committee in downtown Moscow, Russia, Tuesday, Feb. 14, 2012. (AP Photo/Alexander Zemlianichenko)