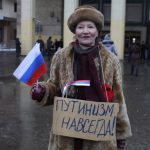 Vladimir Putin gave a seven-minute speech during his appearance at the Luzhniki stadium yesterday, using ‘militaristic rhetoric’ and talking about needing to defend Russia from anyone who would ‘impose their will on us’.  The BBC (click for video) called it ‘an impressive show of strength by the political establishment’. Putin also engaged in vague warmongering, declaring that ‘the battle for Russia’ is on, although the vague foreign enemy was not named.  Police estimate the total crowd at 130,000, with many reporting on the mobilisation required to get so many people to attend (many bussed in from out of town).  Separately, Putin praised Cold War-era scientists for stealing U.S. nuclear secrets, part of his pre-election anti-U.S. rhetoric.  A new poll by the independent Levada Center suggests that Putin will win 66% of the vote on March 4.  Television presenter Ksenia Sobchak has added her voice to those opposing another Putin rule, making a satirical video of herself pledging support for Putin under duress.  The Liberal Democrats hosted a 3,500-strong rally on Pushkin Square; a Communist rally at Teatralny Proezd gathered 2,500.  Mikahil Prokhorov, meanwhile, has taken to rapping in a bid to win supporters.

Yelena Panfilova has expressed shock that institutions founded prior to 1991 are exempt from President Dmitry Medvedev’s anti-corruption initiatives, which stipulates that the heads of institutions ‘created by the Russian Federation’ need declare their incomes.  This AP report on Russian corruption is a reminder of how ingrained the practice still is, and that it has worsened under Vladimir Putin.  FSB employees have been ordered to relinquish any foreign properties in their asset porfolios before December of this year.  Candidates rejected for the Town Council elections in Stavropol are continuing their hunger strike in protest.

A Duma member has spoken in defence of Russia’s actions with regard to Syria, saying that the West has no right to blame Russia for the current bloodshed.  A feud between Other Russia opposition activists apparently led to the firing of a non-lethal shot from a gas pistol.