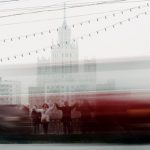 As planned, thousands of anti-government protesters formed a 16-km ‘White Ring’ human chain around the Garden Ring in central Moscow (police estimate 11,000 activists, organisers puts the number at 34,000) RFE/RL has images.  Thousands also marched in St. Petersburg to call for fair elections.  The latest poll from the Levada Center puts Putin’s share of Sunday’s vote at 66%, and Gennady Zyuganov’s share (the second highest) at 15%.  United Russia’s poll numbers have risen 10% since hitting an all-time low in December.  Mikhail Prokhorov has promised that he will found his own, as yet unnamed, political party after the elections – the website of which apparently already has over 20,000 users.  Prokhorov apparently has the lion’s share of Moscow’s ‘caffeine electorate’.  A group of would-be assassins, who reportedly planned to kill Prime Minister Vladimir Putin after the presidential elections this Sunday, have been arrested in Odessa.  The group had aimed to plant mines on a Moscow avenue, according to the BBC.

Putin’s latest article warns that any military intervention over Iran’s nuclear program would be ‘truly catastrophic’, and accuses the United States of pursuing its own interests to the detriment of world security.  The article has been translated here.  Ex-Yukos owner Mikhail Khodorkovsky has an article in The Guardian urging voters to reject Putin at the ballot box and force a second round.  Khodorkovsky and his partner Platon Lebedev have submitted their appeals to the Supreme Court.  James Meek reviews Masha Gessen’s book about Putin, ‘The Man Without A Face’, which ‘makes a strong case that Putin is not merely turning a blind eye to embezzlement and skimming. He is, she asserts, an arch-practitioner.’  The Washington Post recalls a recent study which claimed that ‘Putin and a circle of his friends control 15 percent of the gross domestic product’.

The Guardian has a special article on the anonymous Moscow street artist P183.  An earthquake hit the Tuva region yesterday – no one was injured.  New York’s Causa Artium is drawing attention to an ‘unusually talented’ new generation of Russian writers.