Nothing Normal About This Law 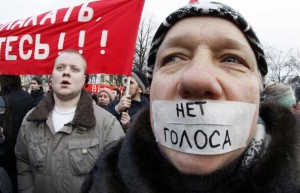 Last week, as the prospect of increased fines for protesting loomed, Vladimir Putin teased those concerned about its implications with assurances that he would not sign the bill if it in any way contravened European ‘norms’.  Once it was signed, despite a panorama of raised eyebrows, he stated with certainty that Western Europeans powers have similar laws.  Today in the Moscow Times, Parnas co-founder Vladimir Ryzhkov explains exactly why this argument is specious.  Of seven main points, here’s the first three:

1. The Russian law violates Council of Europe standards by permitting the government to compel citizens to change the location or route of their rally based on arbitrary grounds. This also violates the European Court of Human Rights’ basic principle that “States must refrain from applying arbitrary measures capable of interfering with the right to assemble peacefully.”

Protest organizers should have the right to choose the location for their rally, taking their target audience into consideration. That right should be the norm rather than the exception. This is stated clearly in the same opinion by the Venice Commission: “An assembly organizer should not be compelled or coerced either to accept whatever alternative(s) the authorities propose, or to negotiate with the authorities about key aspects (particularly the time or place) of a planned assembly. To require otherwise would undermine the very essence of the right to freedom of peaceful assembly.”

2. The Venice Commission finds it unacceptable that a rally or march could be restricted or denied simply on the grounds that it may “cause inconvenience” to the public. It states: “Restrictions are only permitted where an assembly will actually disrupt and a mere possibility of an assembly causing inconvenience does not justify its prohibition. Indeed, inconvenience to designated institutions or to the public, including interference with traffic, should not be as such a sufficient basis for prohibition.”

3. Russian law and partial judges make it impossible for rally organizers to expeditiously challenge a government protest ban or refusal through the courts, essentially stripping them of judicial protection.