Obama in Thailand – Time to Look Beyond the Asia Pivot 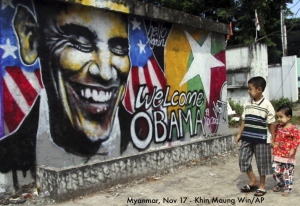 While the choice of this region as the president’s first trip is a clear statement on Washington’s Asia-Pacific strategy, many of us working in these countries see it as nothing short of a historic opportunity.

The timing of the trip is crucial. Slipping in between the media distractions of the Petraeus scandal and the upcoming fiscal cliff, the president is signaling a renewed commitment to the region, extending a steadying hand to the uncertain transition to democracy in Myanmar, bolstering the elected government of Thailand against the threat of another military coup and likely offering a clean slate to Xi Jinping, the newly appointed leader of the Chinese Communist Party.

Throughout Obama’s first term, Washington inherited a longstanding but one-dimensional strategy based on the “Asia Pivot.” The pivot has been defined by an increased military engagement with select members of the Association of South East Asian Nations (ASEAN), such as the Philippines, Singapore, Thailand and Vietnam. This past June, Defense Secretary Leon Panetta said the U.S. plans to base 60 percent of U.S. warships in the Asia-Pacific by 2020, “to be agile, to be quickly deployable, to be flexible” — which was a clear sign to China that its saber-rattling would not be tolerated.

The big problem with the pivot is not only that China negatively views it as a containment policy, but also that by focusing mainly on military relations with ASEAN countries the United States is missing out on building meaningful economic and political ties with wider local populations beyond ASEAN’s leadership.

In Thailand, the U.S. head of state arrives at yet another tumultuous moment, as Prime Minister Yingluck Shinawatra is facing no-confidence challenge in parliament backed by a minority elite and royalist faction. Democracy is in danger, as active duty military officers such as General Boonlert Kaewprasit and Squadron Leader Prasong Soonsiri are leading an extremist movement known as Pitak Siam, whose stated goal is the violent overthrow of the elected government, and, if necessary, to “close down the country” for a few years.

The Thai government is also debating signing a resolution to grant the International Criminal Court (ICC) jurisdiction to investigate the 2010 massacres of more than 90 protesters in Bangkok (full disclosure: I act as lawyer to the Red Shirts group, UDD). A fair and impartial investigation, in which all sides can present their case, would have the potential to change the course of Thai history. Since 1932, Thailand has experienced no fewer than four massacres alongside 11 successful coups, while a royalist dominated judiciary has allowed impunity to reign.

On both these fronts, the visit to Bangkok by Barack Obama can do much to shore up support for the Yingluck government against anti-democratic forces in the country.

To read the full version of this article, please visit RealClearWorld.