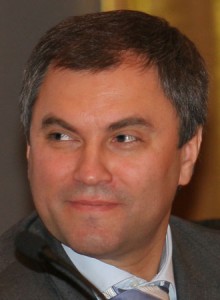 It seemed that the almost unthinkable had happened when it was announced that Vladislav Surkov, the man widely credited as being the creator of ‘sovereign democracy’, the ‘power vertical’ and almost any other terms which could be used to describe the structure we have come to know as Putin’s Russia, had been booted from his post.  Once the ‘puppetmaster’ looming in omniscience over the political stage, Surkov has been demoted to that of a mere usher of ‘economic modernization and innovation’.  The political post-mortem is very much underway.  Whilst some say that Surkov may have been sacrificed as a concession to the opposition movement, others suggests that Vyacheslav Volodin, his successor, may quite simply have beaten Surkov at his own game.  This is from a fascinating analysis at Russia Profile:

Experts believe that, despite the “myth” of his deep influence, Surkov is indeed on his way out. Stanislav Belkovsky, a former Kremlin insider and independent political expert, said the ideologue lost out in a power struggle with his successor, Vyacheslav Volodin, formerly the head of Putin’s governmental staff, for the prime minister’s patronage. “Volodin has managed to distance Vladislav Surkov from Vladimir Putin’s body…Vladimir Putin now trusts Volodin more than Surkov, so he appointed him top political manager of Russia for the coming period,” he said.

Moreover, Belkovsky noted, Surkov was used to a position of power that he used, in part, to craft the enduring myth surrounding him and his influence within the Kremlin. “Now, he has got just a branch where everything is unclear,” he said. “There is no concept of modernization yet, there is no modernization budget – nobody understands what it is – and so this new position is much lower, much less influential than the previous one.”

Others claim Surkov’s reassignment completes a process of political reconsolidation designed to shore up power during a time of greater political turmoil. “It is necessary now that all political affairs and processes run straight through Putin,” Alexei Makarkin, the president of the Center for Political Technologies, told Gazeta.ru. “Ivanov and Volodin,” two proven and longtime Putin loyalists, “will now manage the administration.”

Brian Whitmore also present the hypothesis of an internal power wrangle in his analysis on the Power Vertical blog:

[…] as “Nezavisimaya gazeta” reported today, he was badly outmaneuvered by Volodin, who emerged as his bitter rival in the elite and who orchestrated the creation of Putin’s National Front:

Remember that in the summer Volodin essentially challenged Surkov when he initiated the creation of the All-Russian Popular Front for Vladimir Putin. There were a lot of questions about the Popular Front. But now, after the December elections made it clear that United Russia has lost its popularity in society, the Popular Front is the only real political technology and political base for Putin’s presidential campaign.
Volodin remains, for the moment, a shadowy figure.  In that way, and doubtless in others, he appears rather like his predecessor.
Tags: Russia
Share