One Russian Official Who is Proud to Be a Criminal 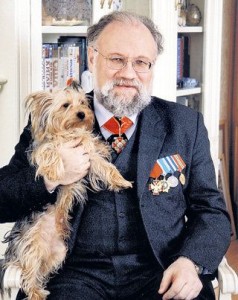 Looking at this happy-looking fellow right here to the left.  Not only is he a highly decorated public servant of the Russian Federation, he loves puppies too (perhaps he was inspired by Paul Krugman’s bizarre cat photos).  His name is Vladimir Churov, Chairman of the Central Elections Committee, and apparently he would like you to know that he is “honored” to be included on the “Magnitsky List.”

For those who haven’t followed the case, the Magnitsky list is an item of draft legislation in the United States which proposes visa sanctions on Russian officials who were personally involved in the murder by medical torture of lawyer Sergei Magnitsky, who was jailed without trial or charges for blowing the whistle on a $230 million tax rebate fraud perpetrated against Bill Browder’s Hermitage Capital Management.  Churov believes inclusion on the list is a credit to his “efficiency” as a Russian public servant, and now he claims he’ll be unable to travel to the United States to observe the 2012 presidential elections.

Here’s a translation of a post by Alexei Venediktov of Echo Moskvy teeing off on the breathtakingly offensive comments:

According to Vladimir Churov, if I understood him correctly, he believes that is an honour to be found on the so-called “Magnitsky list”; although he himself is not there, he was the one who had invented it.

The list of people involved in the death of an innocent person in jail has now become something of a reward for some people.

But sometimes you have to remember that the innocent Vladimir Churov could very easily be in Magnitsky’s place.

As you measure the measure, so you too will be measured.

It’s not hard to understand why Churov was eager to become regarded as a murderer – it can be very good for your political career:  just look at Andrei Lugovoi and Vitali Kaloyev.  But hang on a sec, does anyone remember Churov being part of the Magnitsky list along with all those members of the MVD?  Actually, according to the Moscow Times, he isn’t even on the public Cardin list, and it’s unknown whether he is on the State Department list.

It’s hard to know what’s sadder … being proud to be sanctioned for human rights violations, or having to lie about crimes you didn’t even commit like a junior gang member.