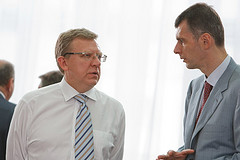 He was bound to resurface at some point, and here he is.  As tales of gloom splash across Russia’s financial press and the Micex is battered by dissent-induced political risk, revered ex-Finance Minister Alexei Kudrin has given an interview to Vedemosti.  In said interview he has reportedly expressed his belief that Russia is in urgent need of a strong liberal alternative to the ruling party, the urgency of which has been validated by the popular protests witnessed across Russia this weekend.  He also asserted his apparent willingness to participate in such a party, though in what capacity remains unclear.

The added exciting twist is the news just in that Mikhail Prokhorov, who had his fingers badly burnt during his brief assumption of the leadership of the Right Cause party (which had apparently been initially offered to Kudrin) in what looked like an act of managed democracy gone wrong, is going to run for president.  Described by the tycoon as ‘the most important decision of my life’, it seems that the protest movements of this weekend have emboldened the billionaire to run the lacerating gauntlet of Putin, Surkov et al once more in March’s presidential poll.  Apparently the former Finance Minister has been in touch with Prokhorov regarding his bid, suggesting a burgeoning political partnership, although nothing is, as of yet, set in stone.  Whether a new party run by an oligarch, built from within the system itself, could attract any significant popular support, or whether it would indeed be able to offer an appreciable difference in stratagem to any of the potemkin ‘opposition parties’ remains to the be seen.  Nonetheless it seems clear that Putin’s ‘managed’ political opposition is morphing.