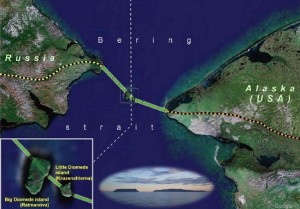 Last week, former Finance Minister Alexei Kudrin announced that Putin’s plans to regenerate Russia’s Far East were ill thought out and precipitous. Wonder what he makes of the following:

In rapid succession, the government leaked a plan to create a “super agency” to develop the Russian Far East; President-elect Vladimir Putin vowed to spend $17 billion a year for new and improved railroads, and Vladimir Yakunin, president of Russian Railways, promoted a think big plan — a rail and tunnel link connecting Russia and the United States.

“It is not a dream,” Yakunin, a close ally of Mr. Putin, told reporters last week. “I am convinced that Russia needs the development of areas of the Far East, Kamchatka. I think that the decision to build must be made within the next three-five years.”

“We can ship cargo between two the continents by rail,” Soloview said by telephone Thursday from his office in Anchorage.

“Once the Bering tunnel is built, it will convert the entire world to different thinking.”

Yakunin estimates that the Russian side of a trans Bering railroad would take 10 to 15 years to build. That could fit into the political calendar of his friend Mr. Putin. On May 7, Mr. Putin will be inaugurated for a new six year term. He has left open the possibility of running in 2018 for another six year term.

Read all about the plans here.