Putin’s Return Offers Many A Punchline 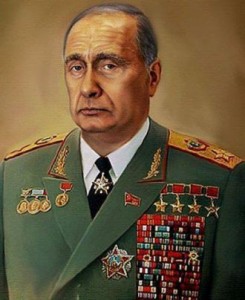 Many have lamented that since the demise of the puppet show Kukli, which was taken off the air in 2002, allegedly following pressure from the Kremlin, the place once held by Russian political satire has remained sorrily empty.  Earlier this month, Russian viewers were deprived of the sight of a comedy sketch which lampooned Medvedev dancing like a wall flower after it was pulled from state TV before it could be aired, one of the many examples of how difficult it is to employ humor when dealing with Russia’s ruling elite.  The prospect of Putin’s return to the Presidency has however sparked an unmitigated barrage of new jokes.  If Putin’s going to face this repository of comedy gold, he may need a sense of humor transplant (as well as a hair transplant) to see him through the next ten years.  From the Moscow Times:

“Satire always offers the sharpest and most accurate diagnosis of societies’ problems. Tell me what a country is laughing about, and I’ll tell you what kind of country it is,” satirist and writer Viktor Shenderovich said. “Today that is Putin and his United Russia party. In the last few days, the Internet has filled up with caricatures and jokes depicting a Brezhnev-like Putin: The analogy is obvious.”

The jokes about Putin in recent years tended to underline his role as a strong leader at the expense of Medvedev, who was often portrayed as a puppet. But a new type of joke has now emerged, Shenderovich said.In one, a man walks through Moscow traffic knocking on car windows: “Terrorists have kidnapped Putin and threaten to douse him in oil and burn him alive if they aren’t paid a $10 million ransom. Will you make a donation?

“One driver answers: ‘I’ll give you five liters.'”

Shenderovich said the caustic jokes and satire suggested that people were increasingly fed up with the way things were going in Russia, and with Putin.

“As a historian of anecdotes, it’s a completely new theme that people are so tired of Putin that they’d rather give oil to see him burn,” he said.

He and other observers say mockery of Russia’s rulers has burgeoned in private as State Duma elections approach in December, and before the presidential election in March, with people frustrated about having little real say in politics.

One acerbic joke goes: “Did you hear? The new presidential candidate Vladimir Putin promises to correct the mistakes made by Prime Minister Putin’s government, which inherited the mess created by former President Putin.”

In another, Putin asks Medvedev: “‘Dima, guess who is the successor to my successor?’ Medvedev waffles, ‘Err, well, I don’t know, who?’