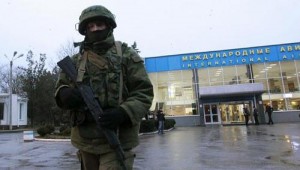 Russia’s de facto annexation of Crimea is almost complete – the point of no return has been crossed. This past weekend, a dubious referendum was held under gunpoint, with an amusingly high 97% voting to separate from Ukraine and join Russia (Kim Jong-un’s 100% elections are brought to mind). As Russian troops threaten to reach further into Ukrainian territory, Western leaders are struggling with an commensurate response to the most brazen intra-state conflict in Europe since the Balkan War.

President Vladimir Putin has entered uncharted territory in terms of Russia’s isolation from the entire international community. On Monday, the United States and the European Union initiated a raft of sanctions, including travel bans and asset freezes against dozens of senior Russian officials involved in the attack on Ukrainian sovereignty. The UN Security Council voted 13-1 in favor of adopting a resolution declaring the Crimean referendum as invalid.  China, which has traditionally taken Russia’s side on issues of “non-intervention” and “spheres of influence,” abstained from the vote. Moscow is literally left with no friends on this adventure.

As economist Sergei Guriev notes in a recent article, the Crimea maneuver and the ensuing sanctions pose catastrophic damage to the Russian economy. But there are many indications that Russia’s leadership is willing and ready to take the hit.

The list of individuals included on President Barack Obama’s executive order include well known characters such as Vladislav Surkov, Sergey Glazyev, Leonid Slutsky, Andrei Klishas, Valentina Matviyenko, and Dmitry Rogozin.  However, most crucially, the sanctions do not yet include either Igor Sechin or Alexei Miller, respectively of Rosneft and Gazprom, showing that Russia’s gas weapon over Europe still has some value.

It may not matter anyways, as a few days before the sanctions more than $100 billion in U.S. Treasury Bills were moved into offshore custodians, signalling that many Russian elites have already prepared to weather the storm. Even back in 2012, Putin ordered all officials to repatriate their assets in order to reduce possible international leverage against the government. Additionally, the president reduced his circle of trust down to a minimum number of former KGB officers, including people like Vladimir Yakunin, CEO of Russian Railways, and other senior Russian officials who are believed to have very little international exposure and are unlikely to feel the sharpest sting from the sanctions.

Some analysts have suggested to me that the economic damage can actually increase Putin’s influence over perceived competitors within the power structure, cutting in half their net worth.

So the big question everyone is asking is “why” – why would Putin want to throw away the economic gains of the past decade, the soft power joyride of Snowden asylum, Syria, and Sochi, and the relatively effective Ostpolitik with Germany? All this for a very small piece of land that was already wholly controlled by Russia and would most likely continue to be controlled throughout the next government in Kiev.

Some observers are dusting off the comfortable narrative of a “new Cold War.” Others are struggling and stretching to make it seem as though the invasion of Crimea were a rational, interests-based decision on behalf of the Russian government. Whenever a policy wonk starts talking about NATO expansion in the 1990s as a blanket justification for Putin’s expansionist agenda, an angel loses its wings.

These arguments all feature elements of truth, but in my view, the battle for Ukraine is driven much more by Putin’s domestic political interests than any complex geopolitical calculation regarding Russia’s position in the international system.

Russia’s invasion of Ukraine has been accompanied by an aggressive and effective propaganda campaign inside Russia that many outsiders would find difficult to comprehend. Final vestiges of independent media like Rain TV and Lenta.ru have been extinguished, along with the decimation of RIA Novosti. State television has gone so far as to threaten the United States with nuclear annihilation, showing images of missile arcs and mushroom clouds. The new leadership of Ukraine has been dismissed as illegitimate and the product of a “Nazi” coup, reviving a deeply familiar trope from Soviet times of anything perceived as against communism being branded as fascism.

It’s all quite incredulous, offensive, and stupid, but it is working. Latest polls show a 70% approval rating for Putin – a level of support he hasn’t enjoyed in years, while the opposition has been successfully quelled through a combination of tactics.

Putin and his coterie were facing a political equation of diminishing returns. While prosperity and quality of life has improved for millions of Russians over the past 14 years, the system has been built upon a model of corruption as an organising principle and proximity to power as the only law. With significant economic pressure on the horizon, negative demographic trends, and a bankruptcy of ideas, a war with Ukraine ticks all the boxes of what Putin needs: continuing power, control, fear, and international isolation. It has already been a politically successful project despite the negative long-term consequences.

If we want to understand what Putin is doing and what motivates him toward these seemingly self destructive measures, the most important place to start is considering his position at home and among the ruling clans.