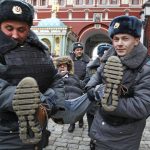 On Saturday 60 people were detained in Moscow when riot police swept in on an anti-Putin rally.  Among the detainees was Eduard Limonov, head of the outlawed National Bolshevik Party.  In St Petersburg, police detained around 15 of the 50 protesters who gathered for an anti-Putin demonstration, including local opposition leader Olga Kurnosova.  Yesterday, several hundred people who attempted to gather in Moscow’s Red Square for a white ribbon protest, found the square closed ‘for repairs’.  Around 30 people were detained by police.  Following a spate of scandals over police brutality, officials are apparently investigating the death of a 45-year-old man while in custody in the Siberian city of Tyumen.  Russia’s Investigative Committee has alleged that jailed Yukos founder Mikhail Khodorkovsky may have funded the work of a number of human rights experts who would later say his second conviction should be overturned.  The allegations have been vociferously denied.  Does one of Putin’s famously sheltered daughters write a blog?

In Yaroslavl’s mayoral runoff election, opposition candidate Yevgeny ­Urlashov looks set to win over rival and United Russia member Yakov Yakushev.  Apparently Urlashov’s offices were searched by police prior to the election.  The opposition candidate has also accused his rivals have been disseminating fake campaign material in his name in an attempt to tarnish his reputation.  According to Ria-Novosti, election monitors reported a number of violations.  Left Front leader Sergei Udaltsov will not participate in a meeting between President Dmitry Medvedev and representatives of the opposition which he considers to be a Kremlin ploy.

The Telegraph reports that exiled Chechen Prime Minister Akhmed Zakayev, who lives in London, may have been the target of an assassination plot by current Chechen President Ramzan Kadyrov.  A senior Russian human rights official has criticized the publication of school notebooks with covers featuring Russian political figures, among them Stalin.  The Obama administration has expressed concern about the apparent harassment of US Ambassador Michael McFaul by Russia media.  An Iranian Foreign Ministry spokesman foresees a ‘leap’ in relations with Russia once Putin returns to the Kremlin.

32 out of 43 passengers were killed when an ATR 72, a twin-engine, turbo-prop plane, crashed after takeoff from the western Siberian city of Tyumen.  Today’s crash was, according to Bloomberg, the first in Russia of a non-Soviet plane since September 2008.