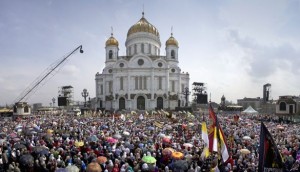 More than 50,000 people gathered in prayer outside Moscow’s main cathedral on Sunday to show their support for the Russian Orthodox church in the wake of recent controversies.  Among the faithful were members of motorcycle gang “Night Wolves”.  Rock journalist and staunch Putin opponent Artemy Troitsky offers his own prayer to protest in the Moscow Times.  The Washington Post’s Suzi Parker sings the praises of incarcerated Kremlin critics Pussy Riot, for whom protests were held across the globe this weekend.  On Saturday thousands of people, among them Communist Party leader Gennady Zyuganov, assembled in the city of Ulyanovsk to march in protest against the proposed establishment of a transit center for NATO.  Ria-Novosti, which puts the number of attendees at 800, says that supporters of A Just Russia Party, the Left Front Movement and The Other Russia also participated.   Left Front leader Sergei Udaltsov has apparently filed a request with Moscow authorities to hold a “March of a Million” on May 6, the eve of Vladimir Putin’s inauguration as president.  Udaltsov has denied assaulting a Kremlin-sympathetic journalist and filed a defamation suit against her.

In Astrakhan, seven supporters of A Just Russia hunger striker Oleg Shein have been detained for attempting to arrange a ‘funeral of freedom’ protest.  Central Elections Committee head Vladimir Churov has offered a glimmer of hope to the protestors by announcing that there is evidence of widespread procedural violations in the election that Shein lost.  The Washington Post reports on how old-fashioned methods have proved as germane to the Astrakhan protest movement as those offered by digital media.  The Moscow Times examines how ecological activism is gathering speed.

In a sign of deepening cooperation between the two BRIC members, China and Russia have launched joint naval exercises.   The new United Nations Security Council resolution on Syria, which proposes sending 300 unarmed UN observers to the war torn state to monitor a cease-fire agreement ‘is the latest evidence that Russia is adopting a more assertive and sometimes combative foreign policy’, says this article.  Fyodor Lukyanov, an analyst at the Council on Foreign and Defense Policy in Moscow quoted by Bloomberg says that brokering a solution on Syria would be ‘a major victory for Russia’.

PHOTO:  Thousands of believers attending a prayer service at the Christ the Savior Cathedral in central Moscow on Sunday, April 23, 2012.  (Vladimir Filonov / MT)