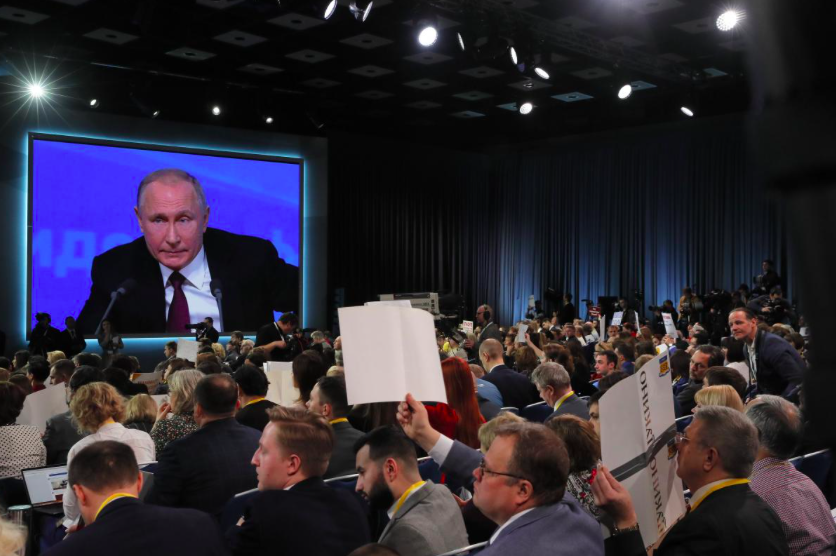 Here are some highlights from President Vladimir Putin’s annual question and answer session yesterday. He said that the US increased the risk of nuclear war by leaving the Intermediate-range Nuclear Forces Treaty, described sanctions and the Sergei Skripal case as different ways of constraining Russia’s growth as a competitor, blamed Ukraine for the latest row, and said there is nothing Japan’s Prime Minister can do about military expansion in the Kuril Islands. Putin endorsed private military contractors, saying they had a right to push business interests within the remit of Russian law. As Bloomberg points out, however, “mercenaries are illegal under Russian law”. He commented that UK Prime Minister Theresa May has no choice but to go ahead with Brexit, (“Why have a referendum at all?”) and said that he worries about the state of Anglo-Saxon democracy in general.  Navalny Live, the opposition Youtube channel, also closely followed Putins Q&A. “He sits for hours and just lies. And no one stands up and says to him, ‘Why are you lying?’”

British media regulator Ofcom said that Russian state news organ RT (formerly Russia Today) broke impartiality rules seven times this year and that its license may be revoked. In response, Roskomnadzor said it would investigate BBC World News to ensure that they are in compliance with Russian law. News that the US will lift sanctions on aluminium giants Rusal and En+ sent prices plummeting and company shares soaring. Reuters considers the personal challenge to Oleg Deripaska, a businessman who “has never before sold a major asset”.

The Independent prods the rumour that Russia is going to unify with Belarus, and that Putin is secretly “scenario planning” around Belarus with regard to the end of his term in 2024. A major earthquake (7.4) has struck off the Kamchatka Peninsula, but no damage of threat of a tsunami are being reported.