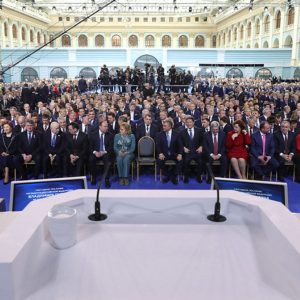 TODAY IN RUSSIA: Putin’s state of the union address focuses heavily on domestic development. Demographic deficit, business climate and brittle relations with the US among subjects approached. Poll finds majority of Russians believe it is impossible to do business in Russia whilst playing by the rules. Moscow will point its weapons at Western targets, asserts Putin. Jehovah’s Witnesses speak of torture in police custody. Smog in Sibai causes outcry.

It seems President Putin has taken note of his dip in popularity polls; his state of the union address focused on improving the lives of ordinary Russians, with a programme of improvements to education, health and pensions, to which $380 billion will be allocated. Leonid Bershidsky notes, “the social program looks like the most ambitious one Putin has ever outlined”, all the while wondering how the President intends to fund these interventions. The President seemed to allude to the case of recently detained US investor Michael Calvey, noting “good-faith business shouldn’t feel threatened by the law or constantly feel the risk of criminal or even administrative punishment.” According to a recent poll, 62% of Russians believe that it is impossible to conduct business in Russia “without hiding anything or deceiving anyone”. Putin also pledged to combat demographic decline with bonuses for families having more children. He cautioned the US against underestimating the power of Russia’s military might, but commentators noted that this year, unlike last, he did not use the address to catalogue the new weapons Russia is developing. In the meantime however, the Defense Ministry has stepped in and offered up this new footage. For a detailed commentary on the whole of the address, see RFE/RL’s live blog.

In a speech to senior officials Putin said in response to the news of possible deployment of missiles that could reach the Russian capital in ten minutes, Moscow would be forced to consider “symmetrical and asymmetrical actions”.  He also confirmed that Russia will develop new weapons and aim them at western “centres of decision-making” if the West deploys new short and medium-range missiles in Europe, though he denies that this is a threat. Russia must also steel itself for possible Western attempts to deny it access to the global internet by creating its own self-sufficient “segments” of the web.

In the Khanty-Mansi region the Jehovah’s Witnesses, which have been banned by the authorities as extremist, say at least seven of their members have been tortured by police after being detained. Residents of the pollution-blighted town of Sibai are mounting a campaign to draw attention to the “ecological tragedy” caused by the operations of the Ural Mining and Metallurgical Company

PHOTO: Putin’s view from the podium at the state of union address. (Kremlin.ru)