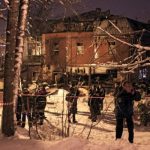 Leftist opposition leaders, among them recently released Left Front leader Sergei Udaltsov gathered a crowd of about 200 activists to a Moscow rally yesterday, at which they advocated reaching out to Russia’s workers.  Activists are planning a series of one-man pickets across Moscow metro stops over the arrest of gravely ill former opposition activist Taisia Osipova, who was jailed in Smolensk on drug charges her supporters claim are politically motivated.  Irrepressible art collective Voina has been cleared of hooliganism charges over its ‘Palace Revolution’ action of September last year, which involved members overturning a police car.  According to his spokesman Dmitry Peskov, Prime Minister Putin’s presidential election program will apparently be based on ‘sociological research‘ and ‘will contain a lot of new issues, a new outlook on the changing world’.  If one thing is likely to galvanize the opposition further, it might be the major budget cuts introduced after the elections, suggests Natalia Antonova in the Guardian.  Mikhail Prokhorov has apparently poached the editor-in-chief of Russian GQ magazine to become head of his ZhV! media group, in an attempt to bolster his presidential campaign.

US Assistant Secretary of State Philip Gordon has lamented that more progress was not made in terms of NATO-Russia and U.S.-Russia cooperation in missile defense.  Are arms sales Russia’s only motive for supporting the increasingly estranged Al-Assad regime in Syria?  Perhaps not, argues this analysis.

According to Ria-Novosti, the head of Russian space agency Roscosmos, Vladimir Popovkin, has suggested that outdated equipment and the possibility of foul play may have been behind the failure of the Phobos Grunt probe.  A gas explosion and fire at a Moscow restaurant has killed two people and injured at least 26.

PHOTO: Firemen and rescue workers seen near the restaurant building hit by gas explosion in Moscow, Monday, Jan. 9, 2012. Officials say a gas explosion and fire at a Moscow restaurant killed two people and injured at least 26. The explosion occurred Monday afternoon in the kitchen of an Italian restaurant in the Russian capital. A fire, believed to have been set off by the explosion, spread quickly through the three-story building.   (AP Photo/Sergey Ponomarev)