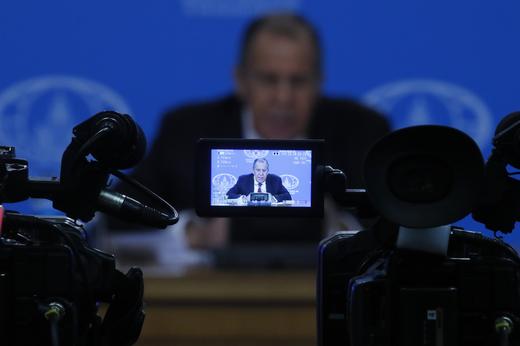 President Vladimir Putin awaits “a hero’s welcome” in Belgrade today as he arrives for talks with Serbian leaders, preparing for his trip last night by criticising the West’s attempts to destabilise the region, and vowing to protect Russian and Serbian interests. Foreign Minister Sergei Lavrov followed the same line, questioning the legitimacy of Macedonia’s decision to change its name, a move that could pave the way for it to join NATO. Lavrov insists that there is no schadenfreude for Russia over the UK’s political turmoil. “We won’t and aren’t saying anything about Brexit,” he said. He also raised the alarm over US talk of military options in Venezuela, chalking it up to a broader US effort to undermine governments around the world. Nikolai Patrushev, the secretary of the Security Council, said that Ukraine is divided by competing interests, controlled by the US, and may not be a country for much longer.

The Kremlin has responded to claims that President Trump worked for Russia. “This is stupid, what is there to comment?” The US Senate rejected legislation to keep sanctions against Rusal and other companies linked to Oleg Deripaska, although 11 of Trump’s fellow Republicans broke ranks to join the Democrats who were in favour of the resolution. EU ambassadors have agreed to sanction the two Russian nationals suspected of poisoning former spy Sergei Skripal with his daughter in Salisbury UK last year.

Meduza has a special report on Yevgeny Prigozhin’s failed attempt to buy a leading investigative news outlet in St Petersburg. Global permafrost is heating up in general, but the most pronounced effects are found in the northern territories of Siberia.

PHOTO: Russia’s Foreign Minister Sergei Lavrov is seen in a screen of a TV camera as he speaks during the annual news conference in Moscow, Russia January 16, 2019. REUTERS/Maxim Shemetov